A spell of unusually severe rainstorms and strong winds hit Saudi Arabia on November 17. Jeddah has been hit the hardest, as up to 1 m (3.3 feet) of flood water has been reported to overflow some areas. At least 8 people have died so far, 2 of which have been electrocuted as power cables fell into flood water. Some media reported 12 victims, as of November 18. One person was reported missing in Hail province.

At least 16 people got stranded by flash floods in Makkah, according to Saudi Arabia's Civil Defence, while Medina, Hail and Arar were affected by severe weather conditions, as well. 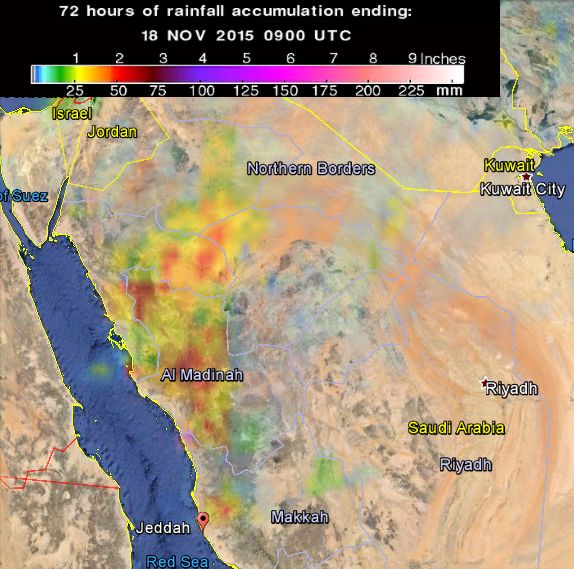 12 die in Saudi Arabia due to thunderstorms, flooding https://t.co/UQCwiixDH8 pic.twitter.com/rbQnCxoIH2

Local officials have advised people to stay indoors.Traffic has been disrupted across the affected areas and several domestic flights from King Abdul Aziz's Airport have been canceled. Numerous trees have been uprooted and power outages have been reported in several places in Jeddah. Rescue teams received 3 000 emergency calls so far, according to Civil Defence statement.

Severe weather is expected to continue into the weekend, according to local meteorologists. Heavy rainfalls which are spreading over Iraq and Saudi Arabia are forecast to move into western Iran, as of November 18.