An international team of scientists, lead by Galactic Archaeology group of the University of Notre Dame, France, has managed to produce the first chronographic age map of the Milky Way's halo using a sample of stars from the Sloan Digital Sky Survey.

Scientists led by Timothy Beers, the University of Notre Dame astronomer, have created a first age map of our Galaxy's halo by using a sample of 4 700 blue horizontal-branch (BHB) stars from the Sloan Digital Sky Survey.

The colors of BHB stars, which burn helium in their cores, are directly related to their masses, which subsequently connects them to their age. The stars' spectrum, collected during the Sloan Digital Sky Survey has allowed the scientists to efficiently distinguish between the BHB stars and other types of stars. Because of that, the scientists have been able to use the colors of the stars in question to produce the chronographic map.

Using this sample the astronomers have confirmed the numerical simulations results that showed the oldest stars are concentrated in the central region of Milky Way.

The researchers have also shown that their chronographic map can be used to identify complex star structures still in the process of being added to the halo system of our Galaxy.

"The oldest stars in the galaxy are concentrated toward the center of the galaxy, as predicted by previous numerical simulations of the assembly of our Milky Way. Surprisingly, the region of the oldest stars extends all the way to the halo region close to the sun. This Ancient Chronographic Sphere can now be explored in order to study the properties of these old stars, which will tell us about the chemistry of the early universe," Beers stated.

The research revealed the ages of dwarf galaxies and their stellar debris, stripped from them during the gravitational interaction with the Milky Way. 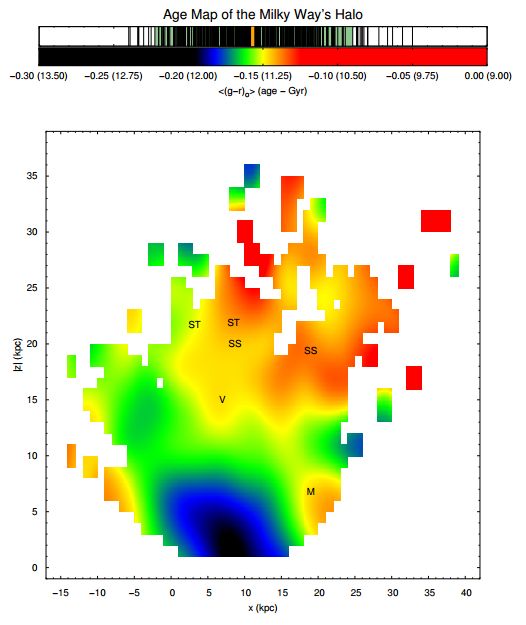 The chronographic map of the Milky Way’s halo system showing a color gradient that is associated with an age difference of roughly 2-2.5 billion years. Image credit: University of Notre Dame

"This information can be used to tell us the assembly history of our galaxy. We can now search for additional debris streams in the halo of the galaxy, based on their contrast in age, rather than simply their density contrast. It is almost like having X-ray vision, as we can see through the numerous foreground stars and not be confused by the equally large numbers of background stars," Beers explained.

The obtained results are highly important as they hold the potential to extend and refine some widespread assumptions in astrophysics.

"We have confirmed one prediction, that the oldest stars, born shortly after the Big Bang, should be found near the center of the galaxy, and demonstrated in addition that searches for ancient stars in the region of the halo close to the solar neighborhood will be highly effective. The assembly history of the galaxy, which is encoded in the ages of the members of the halo population, is now a story that can be explored and told more fully," Beers added.

The Galactic Archaelogoy group at Notre Dame, led by Beers, is now preparing a much more extensive age map of the galactic halo based on hundreds of thousands of BHB stars from the Sloan survey. This map is expected to become a guide for astronomers enabling them to identify new dwarf galaxy debris signatures and the development of a refined history of the assembly of the Milky Way.

Astronomers will also use their new technique to study additional large samples of BHB stars collected through other sky surveys now being carried out, as well as in the near future with the Large Synoptic Survey Telescope (LSST), presently under construction in Chile. According to Beers, "Eventually, the LSST will obtain samples of millions of BHB stars, all the way to the edge of the galaxy, which will also be studied using our approach."