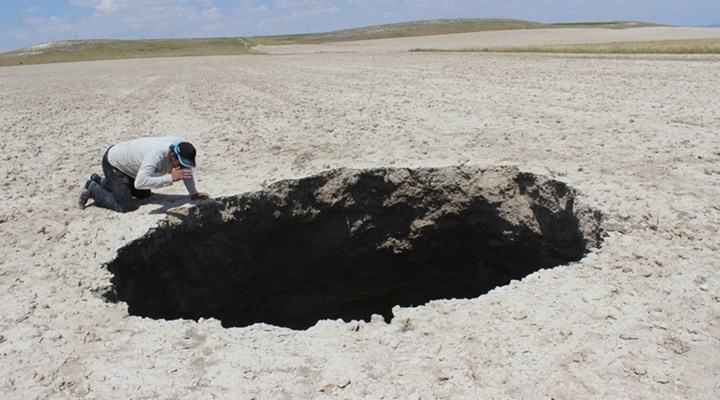 A new sinkhole formed on a farmland in the Karapınar district, Turkey a couple of days ago, media reported on October 7, 2015. This is the 13th sinkhole to form in the area in the last 2 years, and 10th that formed since this year's spring. The new sinkhole is 10 m (33 feet) in diameter and 7 m (23 feet) deep.

The sinkhole has formed in Karapınar’s Kirkitoğlu region, in the central Anatolian province of Konya, Turkey. It is located about 7 km (4 miles) from the nearest town center and 500 m (1 640 feet) from the local residence, according to media report.

Farmer Atilla Köken believes it might have formed a couple of days ago: “Several sinkholes have already formed in the area before. This one is 10 meters across and 7 meters deep. Even if we’re anxious about them there is nothing to do; we’ve grown accustomed to living here."

More than 200 sinkholes have already been identified across the Karapınar’s Kirkitoğlu region, according to University Geological Engineering professor Fetullah Arık.

The Karapınar district is well known for sinkholes, as they appear to often form in the region, most likely triggered by the precipitation accumulation during spring months. Some sinkholes in the area are up to 70 m (230 feet) deep. Local residents reported 9 sinkhole formations since the spring 2015.