Lava flows are descending the southern and western flanks of the volcano through the Trinidad (S) and Santa Teresa (W) drainages and are now reaching 1 000 m (0.62 miles) and 600 m (0.37 miles), respectively.

The activity so far has not resulted in the generation of the much-feared pyroclastic flows, but remains intense and could trigger such flows, if parts of the lava flows on the steep flanks collapse, Volcano Discovery warns. 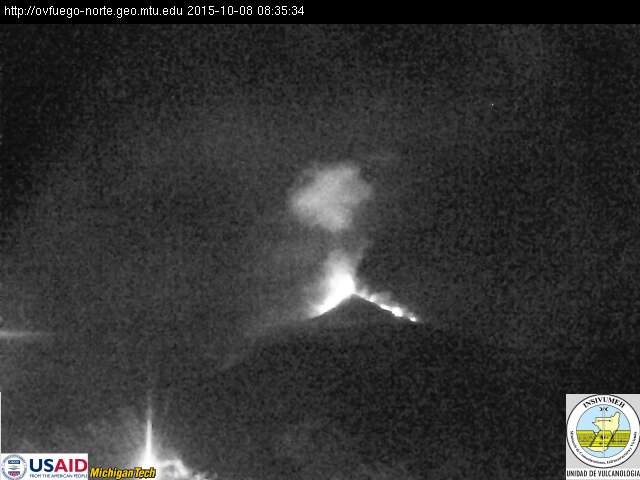 INSIVUMEH reported that during September 30 – October 1 explosions at Fuego occurred at a rate of 4 – 6 per hour, generating ash plumes that rose 950 m (3 100 feet) above the crater and drifted 10 km (6.2 miles) W. Some explosions produced shock waves. Ash fell in Sangre de Cristo and possibly in San Pedro Yepocapa.

Volcán Fuego, one of Central America's most active volcanoes, is one of three large stratovolcanoes overlooking Guatemala's former capital, Antigua. The scarp of an older edifice, Meseta, lies between 3763-m-high Fuego and its twin volcano to the north, Acatenango. Construction of Meseta dates back to about 230,000 years and continued until the late Pleistocene or early Holocene. Collapse of Meseta may have produced the massive Escuintla debris-avalanche deposit, which extends about 50 km onto the Pacific coastal plain. Growth of the modern Fuego volcano followed, continuing the southward migration of volcanism that began at Acatenango.

In contrast to the mostly andesitic Acatenango, eruptions at Fuego have become more mafic with time, and most historical activity has produced basaltic rocks. Frequent vigorous historical eruptions have been recorded since the onset of the Spanish era in 1524, and have produced major ashfalls, along with occasional pyroclastic flows and lava flows. (GVP)