Heavy rainfall and strong winds were sweeping Laos and Vietnam since September 7, 2015, causing severe floods and landslides across the affected area. At least 2 people have been reported dead so far, and 5 more missing.

3 people were reported missing since heavy flooding brought on by severe rainstorms hit the Ha Giang province in northern Vietnam, on September 7, according to the Vietnamese news agency (VNS). Cao Bang and Lai Chau provinces also suffered landslides while strong winds accompanied with hailstorm battered the provinces of Lam Dong, Binh Thuan, An Giang and Dong Thap, according to the official reports of September 10. 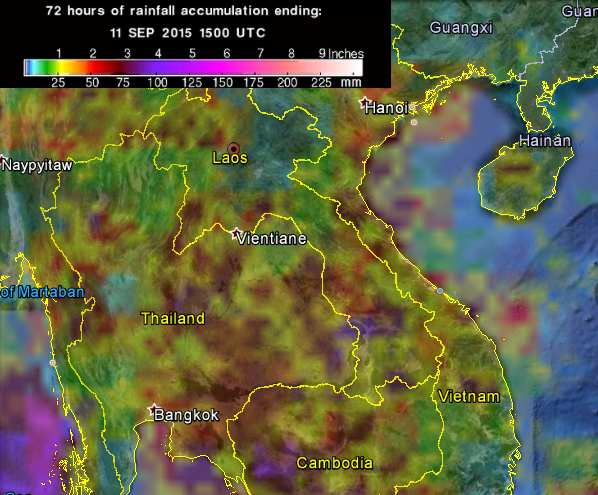 The rainfall of 60 mm (2.36 inches) measured on September 8 in Hanoi severely affected the traffic across Hanoi, although, luckily no victims were reported.

2 people died and 2 more went missing due to flood related incidents in Nan district in northern Laos, while landslides in Nafay village destroyed 9 homes, as of September 10.

According to Mr. Bounthy Maniyong, chief of Nan district, the flood and landslide incidents in the area were previously unseen throughout the history of the village, as they have not only claimed human lives, but also absolutely eradicated Tad-Hien, a well-known water fall of the affected district. 9 houses were completely devastated and 19 more severely damaged.