Tropical Storm "Son-tinh," the 9th named storm of the 2018 Pacific typhoon season, made landfall in northern Vietnam on July 18, 2018, dropping heavy rain. The storm weakened into a tropical depression after it made landfall, moved over the country, briefly entered Laos and turned back into Vietnam, exited into the Gulf of Tonkin, re-intensified into a tropical storm and made landfall over western Hainan, China today. Son-tinh is expected to move over Hainan over the next 12 hours, make its final landfall along China – Vietnam border and continue tracking over Vietnam before it dissipates, bringing more heavy rain and threat of floods and landslides.

Heavy rains and flooding caused by the storm left at least 20 people dead and 16 missing in Vietnam. In addition, at least 14 people have bee injured.

More than 5 000 houses were damaged, swept away, submerged or collapsed, around 82 000 ha (202 000 acres) of crops were damaged and nearly 17 000 animals were killed nationwide, the Vietnam National Committee for Search and Rescue said Saturday, July 21.

At least 11 people are missing after a mudslide in Thanh Hoa Province swept through some 4 000 homes, AFP reports.

Capital Hanoi was also affected and its streets flooded.

Its maximum sustained winds at the time were 65 km/h (40 mph), according to the JTWC.

The environmental analysis shows the system is in an area of favorable vertical wind shear, warm sea surface temperatures and favorable ocean heat content in the Gulf of Tonkin.

It is currently over the western edge of Hainan, tracking eastward along the northern periphery of a near equatorial ridge located to the south.

Son-tinh is forecast to begin to recurve NE along the coast of Hainan and continue to recurve before settling on a NW track shortly after 21:00 UTC on July 23.

Overall favorable conditions in the Gulf of Tonkin will allow the system to maintain its intensity over the next 24 hours despite some land interaction.

After that, increasing vertical wind shear and land interaction will lead to gradual weakening and dissipation over the next 72 hours as the system tracks northwestward into southern China.

Heavy rains are expected over the next couple of days. 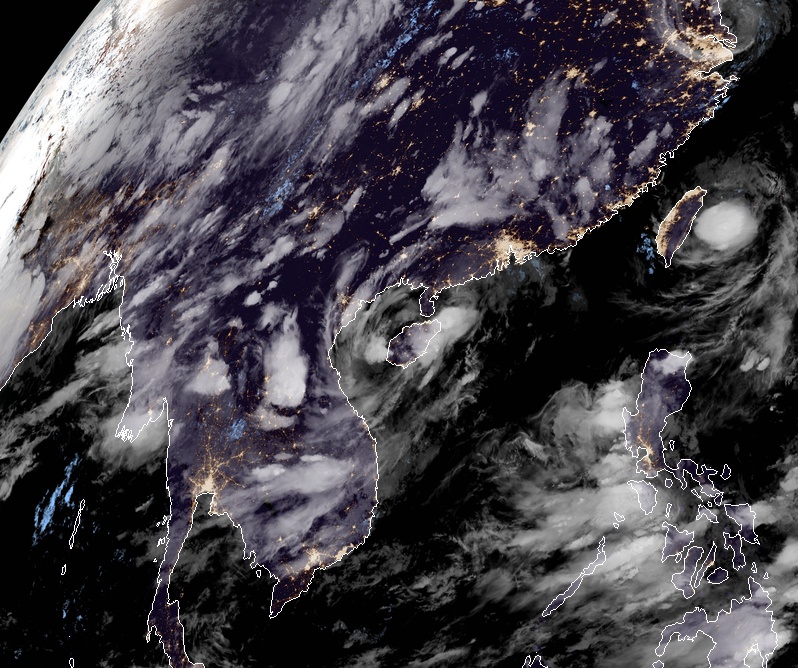 This is the third tropical cyclone to hit the region during the country's 2018 rainy season (June – November). In 2017, heavy rains, floods and landslides left at least 389 people dead.