Tropical Storm "Etau" hit mainland Japan on Wednesday, September 9, 2015 and rolled over the central part of the country, bringing strong winds and record-breaking rainfall which overflowed rivers and caused serious flooding and numerous landslides. By early September 10, at least one person has been confirmed dead, 3 are missing and more than a dozen were injured.

The Japan Meteorological Agency (JMA) has issued multiple rare emergency warnings in both Tochigi, Fukushima and Ibaraki prefectures along the northern edges of the Kanto-Koshin region, urging vigilance against mudslides and flooding.

The hardest hit area on Thursday, September 10 was north of Tokyo in Ibaraki and Tochigi prefectures. Tochigi authorities ordered more than 90 000 residents to evacuate, with another 116 000 advised to leave their homes. In Ibaraki, 20 000 were ordered to evacuate.

In a 24-hr period several locations in Tochigi prefecture received over 500 mm (19.7 inches) of rain shattering previous records for the area. That's double the amount that usually falls in this region throughout September.

"Tochigi Prefecture is facing a grave danger and is in an emergency situation. It is experiencing unprecedented downpour," JMA's forecaster Takuya Deshimaru told an emergency press conference.

Fukushima prefecture, experienced more than 300 mm (11.8 inches) of rain in 48 hours – the heaviest downpour there in 50 years, NHK said.

The Kinugawa River broke through a flood berm early Thursday, sending a tsunami-like wall of water into Joso, about 50 km (31 miles) northeast of Tokyo.

The culprit for all the flooding is the inflow wrapping in behind Etau, explains meteorologist Robert Speta. "Several air masses are coming together in the same spot over central Japan resulting in a “train effect” of rainfall across the area. This is very similar to the same synoptic setup we have seen in Hiroshima last year when multiple landslides hit the city." 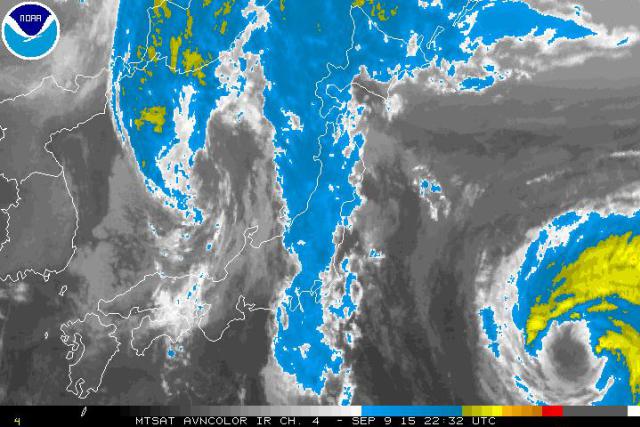 A spokesman for the Tokyo Electric Power Company (TEPCO) said that the torrential downpour has also exacerbated a contaminated water problem at the Fukushima nuclear plant as it overwhelmed the site’s drainage pumps. "Hundreds of tonnes of contaminated water have flowed into the ocean," he said as quoted by The Guardian.

Speta warned the rain will continue impacting central Japan through the rest of Thursday, until Etau starts to pull north east bringing with it the rain band in to the Tohoku region. However, by that point Typhoon "Kilo" will also near Hokkaido bringing high winds to the Nemuro area. "This combined with what's left of Etau could bring additional flooding in Hokkaido and northern Honshu."