A newly formed tropical storm in the central tropical Atlantic, named "Erika", is currently approaching the Leeward Islands at a fast pace. As "Erika" is slowly intensifying, a Tropical Storm Watch was issued for the Leeward Islands over the next 48 hours. There is a possibility Erika will affect Puerto Rico, Virgin Islands, Hispaniola, the Bahamas, Cuba and southeast US, however, its movement cannot be precisely predicted yet, and the situation requires further monitoring.

Tropical Storm Erika forms in the Atlantic, could be hurricane this weekend. http://t.co/tEY5kIgNmm pic.twitter.com/FDomn3pggK 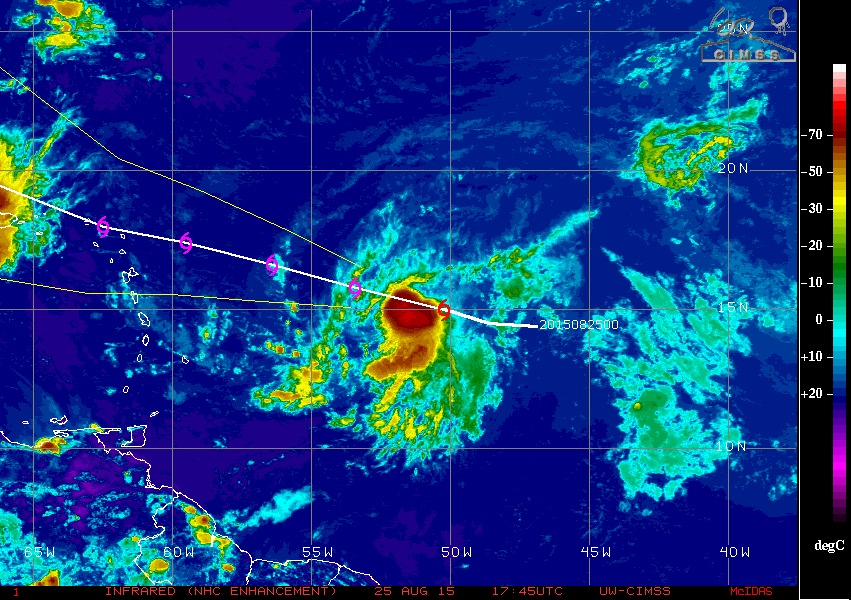 Over the next 48 hours, Erika is expected to move west-northwestward at a slightly lower forward speed. The center of the storm will be near the Leeward Islands on the night of August 26 into the morning of August 27. Maximum sustained wind speeds are expected to remain near 75 km/h (45 mph), although the wind gust speed are likely to increase to about 120 km/h (75 mph).

The most likely path of the Tropical Storm "Erika" over the next 3 days. Image credit: NHC/NOAA.

The tropical storm will slowly strengthen over the next two days, as it will be passing through the moist air mass and low vertical wind shear environment, but its intensity will likely retain a "tropical storm" level, with winds extending up to 130 km (80 miles) from its center.

A Tropical Storm Watch over the next 48 hours has been issued for the areas of Montserrat, Antigua and Barbuda, St. Kitts and Nevis, Anguilla, Sabba, St. Eustatius and St. Maarten, Guadeloupe, St. Martin and St. Barthelemy. Over the coming days, additional watches may be required across the areas of Puerto Rico and the Virgin Islands, as the the storm could bring winds and strong rainfall to the drought-stricken areas.

Forecast for #Erika is incredibly uncertain. GFS and Euro are in terrible disagreement. http://t.co/pow94gcozd pic.twitter.com/1B5PNsCtPF

It's future movement is hard to precisely forecast for the time being, due to the possibility of a stronger wind sheer and proximity of the dry air mass, as the system approaches the Caribbean.

The progress of the tropical storm will require further attention over the coming days, as its path might progress toward Hispaniola, the Bahamas, Cuba and the southeast US coast.