According to Brett A. Carter, lead author of the new study published in in Geophysical Research Letters, massive space weather events have crashed power grids across North America and Europe, but this new report warns that smaller events strike, often with little warning, in equatorial regions with greater frequency than previously know.

These equatorial electrical disruptions – fueled by geomagnetically induced currents – pose a threat to power grids in countries where shielding electricity infrastructure from space shocks has not been a recognized priority.

"These disturbances affect what's happening in the equatorial region, which has largely been overlooked," said Carter, a space physicist who is also affiliated with RMIT's SPACE Research Centre in Melbourne, Australia. "What the historical data also show is that we don't need huge geomagnetic storms to experience the effects. They can also take place during what we might otherwise classify as 'quiet' periods of space weather."

In other words, electrical disruptions in the equatorial region do not require severe geomagnetic storms, similar in scale to events that have crashed power grids in the past, most notably in Quebec in 1989 and in Sweden in 2003.

Analyzing 14 years of data collected in space and on Earth, the team found that geomagnetically induced currents are amplified by the equatorial electrojet, a naturally occurring flow of current approximately 100 kilometers (62 miles) above the surface of the Earth. Wending its way through the Earth's ionosphere along the magnetic equator, the electrojet travels above large swaths of Africa, South America, Southeast Asia and the southern tip of India.

Carter and his team examined the effects of interplanetary shocks in the solar wind, which is the stream of charged particles that flows out of the Sun. Massive explosions on the Sun's surface can cause these shocks, but many are created through far less violent means.

The arrival of these shocks at Earth causes complex phenomena in the Earth's magnetosphere and ionosphere, which provokes spikes in current at the Earth's surface, said Carter. 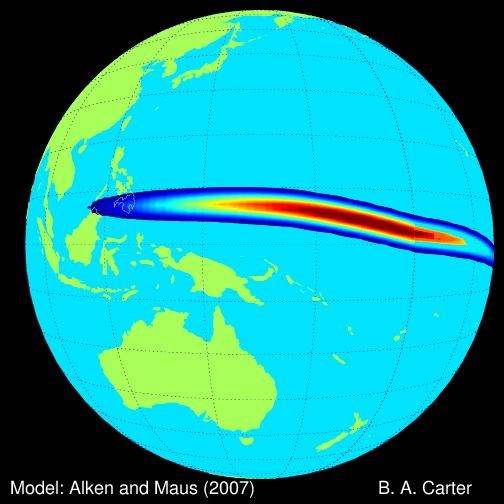 The equatorial electrojet is a naturally occurring flow of current approximately 100 kilometers (60 miles) above the Earth's surface. A new study shows it amplifies the effects of space weather near the equator, putting power grids at risk in regions previously thought to be less prone to space weather than high-latitude regions. Image credit: Brett A. Carter.

"The Earth's magnetic field does the job of shielding the Earth from the solar wind and when it gets hit by these shocks, you get a global magnetic signature at the ground," Carter said. "This magnetic signature becomes locally amplified by rapid changes in the equatorial electrojet, which increases the induced current levels in the ground near the equator."

While not the "doomsday" scenarios posed by extreme space weather events, these smaller episodes can damage unprotected power infrastructure and even cause fluctuations in wholesale electricity pricing, as surges in induced current at the Earth's surface effectively confuse systems monitoring rates of supply and demand.

Carter said the realization that the Earth's equatorial regions are far more susceptible to disruptive space weather should prompt scientists to examine the implications on regional infrastructure and economies near the equator.

Carter said that he think this new finding is cause for a new way of looking at the impact of adverse space weather in a largely unstudied region, where health and economic well-being are increasingly reliant on dependable power infrastructure.

Featured image: Sparked by a medium-sized (C-class) flare, a long, magnetic filament burst out from the Sun, producing one of the best shows that SDO has seen (August 31, 2012). Viewed in the 304 Angstrom wavelength of extreme ultraviolet light, the filament strand gets stretched outwards until it finally breaks and heads off to the left. Some of the particles from this eruption did hit Earth with a glancing blow on September 3, generating some beautiful aurora. Credit: NASA / SDO.