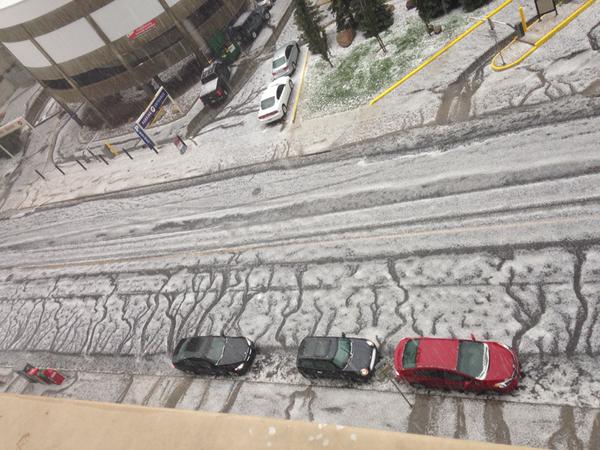 Severe rainstorm accompanied with strong winds, lightning and heavy hail hit Calgary, Canada on August 4, 2015. Traffic has been delayed due to weather related incidents, one rooftop was ripped of a building, streets were blanketed with snow like hail balls and flooded in places.

Weather officials said the consequences of the strong hailstorm could have been much worse, had the air crew from the Alberta Severe Weather Management not been cloud seeding, following the storm clouds development. The cloud seeding process reduces the size of hail balls from larger icy objects to smaller pellets and ice crystals.

The project team has so far seeded 68 storms.

“We did have three aircraft on those two severe cells that tracked across Calgary and it was seeded. The majority of the hail was a lot of pea and grape-sized, there were confirmed reports of loonie or toonie-sized", the Society project director Terry Krause said.

"To seed the clouds, we use silver iodide in the form of pyrotechnics (flares). Flares are attached to the wings of an aircraft, and they look identical to a highway or railroad safety flare. It’s ignited electrically when we are in the cloud. The smoke particles are silver iodide, and they produce ice crystals at temperatures just below freezing. The idea is to make copious amounts of ice crystals that grow and use and consume the liquid water in the cloud before it turns into large hailstones.”

First successful cloud seeding in Canada was also performed in the area around Calgary, during 1960s, by the Irving P. Krick & Associates. The team used airborne and ground-based generators to pump silver iodide into the atmosphere, in order to decrease the risk of hail damage.​

After flash flooding and crazy hail in Calgary, storm watches are up for Alberta and Sask.: http://t.co/FUstEVZpN5 pic.twitter.com/7d8pF6xlyJ

“There’s more forecast for today, it’s a major, upper-level low pressure system and we’re out in front of it and when the upper level winds are strong, it helps generate long-lasting, severe storms that tilt over and can have strong wind and it’s conducive to the growth of hail, lots of it,” Krause explained.

Total damage caused by the Calgary storm is yet to be estimated. As another hailstorm approaches the city, the residents are warned to stay alert: “We encourage all citizens to protect themselves and their homes during severe weather. Stay indoors. Stay off of the roads to prevent getting caught in fast moving water.”, Deputy Chief Sue Henry said.