A massive tornado event took place near Pierson in the Canadian Manitoba province, around 01:30 UTC on Monday, July 28, 2015. Tornado roared through the province for almost 3 hours, until about 03:55 UTC, possibly setting the record for the longest lasting tornado touch-down in Canada and maybe even worldwide. No injuries or victims were reported. 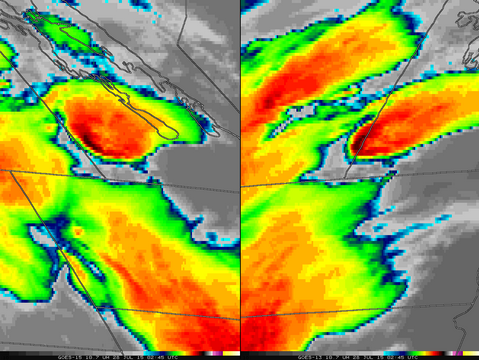 The animation (linked above) shows GOES-15 and GOES-13 infrared imagery at designated time scales. A storm is tilted toward the north, over the southwest of Manitoba, and an enhanced V signature is apparent in the GOES-13 imagery. 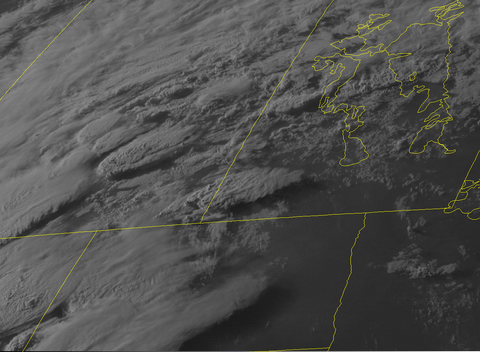 Visible imagery from GOES-13 showing the overshooting tops associated with the tornado supercell storm, along with a quickly expanding shield of cirrus clouds (Animated image)

The violent tornado was rated in EF-2 category, which means the wind speeds were ranging between 179 to 218 km/h (111 to 135 mph) leading to severe infrastructural damage, including uprooted trees, roofs blown off houses, destroyed sheds and upturned mobile homes. This tornado tore it's way through rural southwest of Manitoba province, severely damaged trees, farms and roads, however, luckily, no cities or settlements were lying on it's path, Environment Canada reported.

According to radar imagery, the twister stayed on the ground for more than two and a half hours, which is an extremely rare event in Canada where tornado touch-downs usually last for a few minutes, Mike Macdonald, Environment Canada meteorologist, explained. "To be on the ground for 2.5 to three hours is phenomenal … and to miss everything is basically a miracle", he concluded.

The longest lasting tornado in the history was recorded in March 1925. It's touch-down lasted for about 3.5 hours, and it ravaged the Midwest, leaving behind hundreds of victims. "The path length distance of the Manitoba tornado might be shorter, but the duration may be comparable", said Randy Cerveny, an expert of climate and weather extremes for the World Meteorological Organization (WMO).

David Wills, a tornado expert of Environment Canada, said that if the conclusive analysis determined that the tornado touch down indeed lasted for three hours, "that would likely be among the longest tornado tracks in Canada … Perhaps the longest".

The weather system responsible for the twister event also brought snow and icy weather accompanied with cold winds to parts of the U.S. Rocky Mountains and strong hailstorm across the regions of northern Plains.

“This pattern should not happen in July,” said the weather service forecast office in Billings.