El Niño events typically strengthen during the second half of the year, reaching full strength during late spring or early summer (southern hemisphere). However, it is not possible at this stage to determine how strong this El Niño will be.

The SST anomaly map for May 2015 shows positive anomalies across the equatorial Pacific. These positive anomalies extend from the South American coastline, and past the International Date Line to around 160°E. The northeast Pacific Ocean continues to remain above average, while SST anomalies surrounding Australia cooled compared to April, with May anomalies in the Australian region generally close to average.

All five NINO indices averaged over the month were greater than +1 °C, which again has not occurred since the 1997–98 El Niño.

The four-month sequence of sub-surface temperature anomalies (to June 22) shows a generally similar pattern has been maintained in June so far as was present for May and April, although the strength of warm anomalies has increased across the three month period.

The Southern Oscillation Index (SOI) has risen over the past two weeks, although this return to neutral values is expected to be temporary and results from local weather factors rather than a change in the broadscale pattern.

The latest 30-day SOI value to June 21 was +0.7. The 90-day SOI remains within El Niño territory, indicating persistent higher atmospheric pressure in the western Pacific at the three-month timescale. 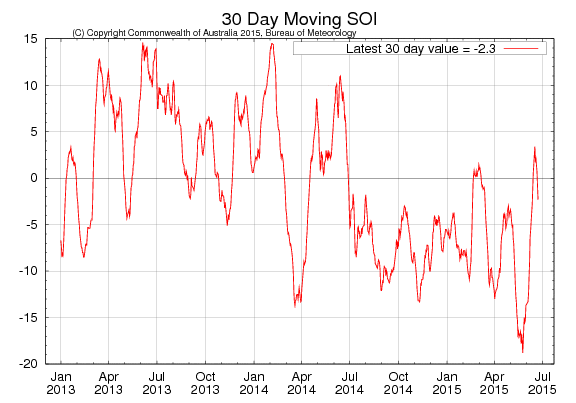 Cloudiness near the Date Line has returned to above-average values during the past two weeks. Cloudiness has been generally above average since the start of March, with brief forays into slightly below average values at the end of May and start of June.

All eight of the surveyed international climate models indicate the central Pacific Ocean will warm further during the coming months.

All surveyed models indicate that NINO3.4 will remain above El Niño thresholds until at least late 2015.

The Indian Ocean Dipole (IOD) is currently neutral. The latest weekly value of the IOD index to June 21 is −0.07 °C. Temperatures in the Indian Ocean are warmer than average over much of the basin. Three of the five surveyed international climate models indicate a positive IOD event will occur during the southern hemisphere winter or spring.

The unfolding El Niño event is predicted by climate models to be a major event, possibly one of the strongest ever recorded, UN Office for the Coordination of Humanitarian Affair said today.

What does this mean for the Pacific?

There is an elevated risk of intense cyclones, potentially early start and late nish of the cyclone season, and an elevated likelihood of cyclones particularly in Niue, Samoa and Cook Islands (east of Tonga).

Increased risk of disease by extreme weather events including oods and droughts that can precipitate outbreak of diseases including diarrhoea, leptospirosis and typhoid, by exposure to contaminated water or decreased hygiene due to water shortages; and increased vector borne diseases including dengue, chikungunya and Zika virus due to increase mosquito vectors and increased temperatures that can enhance reproduction and transmission of these viruses. 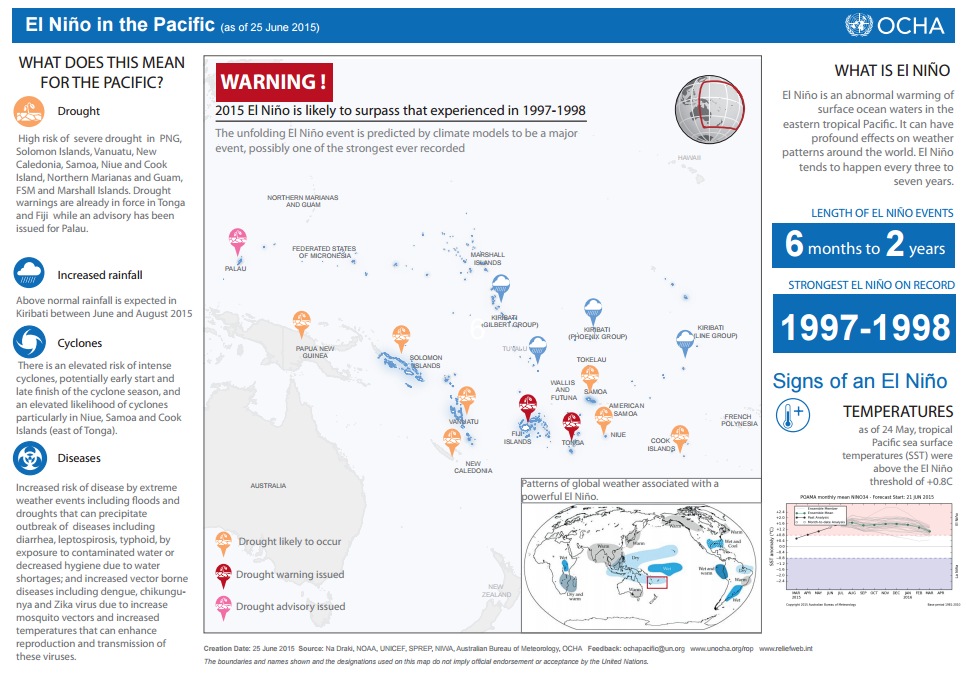