A new eruption has started from a fissure vent at the southeast slopes of Piton de la Fournaise's Dolomieu crater at 09:45 UTC on Sunday, May 17, 2015. The eruption triggered Alert Level 2 (ongoing eruption) and the restriction of access by the public to the summit area. Volcanic ash is not expected, Toulouse VAAC said at 11:43 UTC.

An intense seismic crisis with 5 – 7 earthquakes per minute started about an hour before the eruption and was accompanied by significant deformation of the Dolomieu crater.

VolcanoDiscovery noted that the new eruption seems to be similar in its (small) size and vent location as the last one that occurred between February 4 – 16, 2015. Both probably originate from a same shallow magma reservoir that by early 2015 had grown enough to produce eruptions at the surface.

Frequent (several per year), but generally small eruptions have been a typical feature of Piton de la Fournaise during much of the volcano's recent past decades. 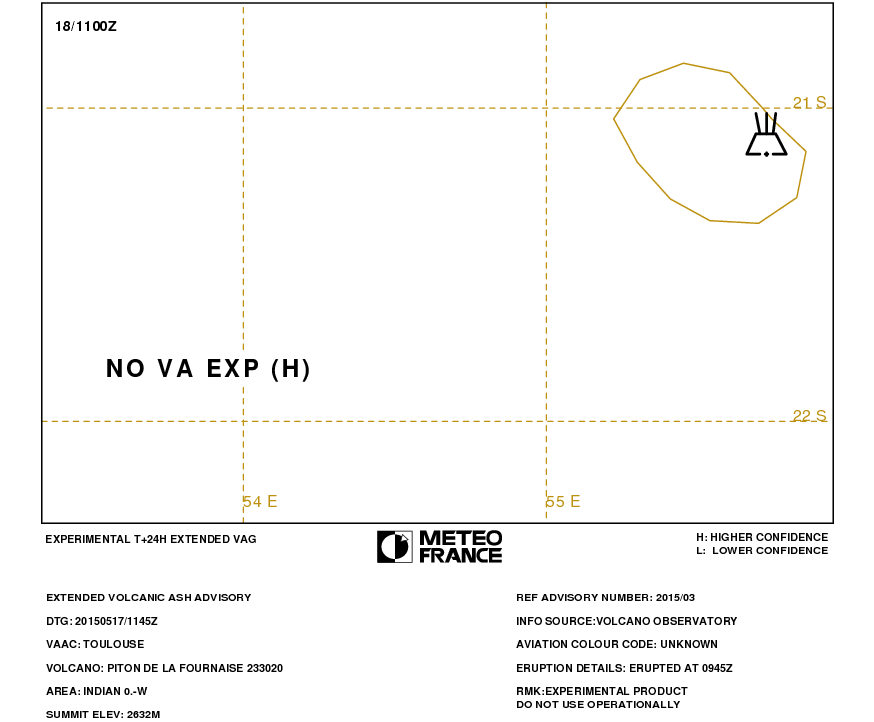 Observatoire Volcanologique du Piton de la Fournaise (OVPDLF) reported that 180 earthquakes at Piton de la Fournaise were recorded from 04:00 to 09:00 (local time) on February 4, 2015 including five events greater than M2. A seismic crisis began at 09:10, tremor was recorded at 10:50, and an eruption began at 11:00. Observers noted that a fissure had opened on the S flank, triggering an Alert Level 2-2 (ongoing eruption) and the restriction of access by the public to the summit area.

The fissure was 500 m long, starting from an area located 100 m outside and to the W of Bory Crater. Activity was concentrated on the southernmost part of the fissure. Lava was ejected from the vent about 10 m high and rapidly flowed SSW towards the Rivals Crater, branched, and spread in an area S and SE of the crater. By the late afternoon the farthest-reaching branch had traveled past Cornu Crater. Tremor levels decreased through the day and were relatively low by 18:00; on February 6 tremor levels were very low.

Small cones had formed over the vents and produced low gas plumes. Inclement weather reduced visibility of the eruption site, although on February 8 observers noted that lava continued to flow from the vents, and another flow traveled further W. On February 9 a vent was weakly active with small explosions and small splashes of lava. Tremor remained stable and low on February 10.

Tremor began to decrease at 17:00 on February 15, intensely fluctuated, and then disappeared around 22:30.

The massive Piton de la Fournaise basaltic shield volcano on the French island of Réunion in the western Indian Ocean is one of the world's most active volcanoes. Much of its more than 530,000-year history overlapped with eruptions of the deeply dissected Piton des Neiges shield volcano to the NW. Three calderas formed at about 250,000, 65,000, and less than 5000 years ago by progressive eastward slumping of the volcano.

Numerous pyroclastic cones dot the floor of the calderas and their outer flanks. Most historical eruptions have originated from the summit and flanks of Dolomieu, a 400-m-high lava shield that has grown within the youngest caldera, which is 8 km wide and breached to below sea level on the eastern side. More than 150 eruptions, most of which have produced fluid basaltic lava flows, have occurred since the 17th century. Only six eruptions, in 1708, 1774, 1776, 1800, 1977, and 1986, have originated from fissures on the outer flanks of the caldera. The Piton de la Fournaise Volcano Observatory, one of several operated by the Institut de Physique du Globe de Paris, monitors this very active volcano. (GVP)