Costa Rica's Turrialba volcano experienced a relatively large eruption starting 05:10 UTC on October 30, 2014 (23:10 local time on October 29). The eruption lasted about 25 minutes and ended with a large explosion. The volcano rumbled back to life in 2010 after 144 years of sleep.

According to the National Seismological Network (RSN), this was Turrialba’s largest eruption in 150 years which managed to merge two of the volcano's craters.

It was characterized by a small phreatic eruption and ash emission which was carried to the west-southwest. The fumarole reached several hundred meters, Carlos Ramírez, a volcanologist at the crater, told The Tico Times. Ramírez said that the eruption involved ash, rocks and possibly magma.

National Emergency Commission (CNE) officials declared a Yellow Alert in the volcano area and the Turrialba Volcano National Park is closed to visitors until further notice.

Members of the Red Cross were the first to reach the scene in the early morning hours of Thursday (local time) distributing masks to visibly shaken residents. Costa Rica’s emergency response officials have prepared an evacuation plan, should the order for evacuation be given. 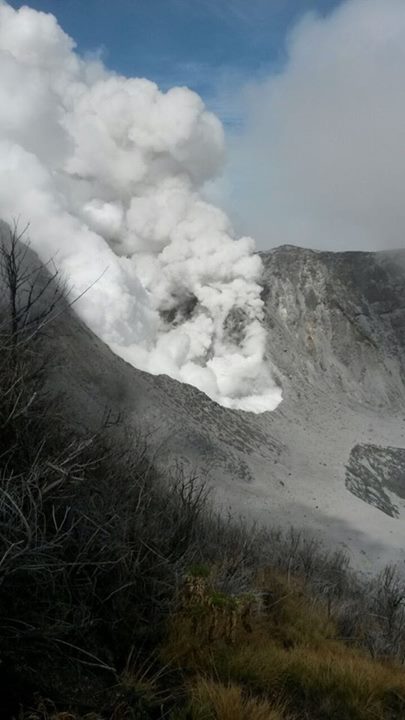 An increase in the SO2 emission was also observed and was measured at 2 000 tonnes per day. This represents an increase to September's average of 1 300 tonnes of SO2 per day and is the highest emission recorded this year.

Turrialba's last major eruption was in 1866, but in January 2001, the volcano experienced increased activity, displaying strong fumaroles at the central craters. The volcanic activities have increased since 2005.

In January 2010, the volcano erupted, and two villages, La Central and El Retiro, were evacuated. OVSICORI-UNA reported that a phreatic eruption from Turrialba that began on January 5 was preceded by a day of increased seismicity and about 30 minutes of almost constant tremor. Two events detected about 15 minutes apart were followed by reports of ashfall as far away as 30 km. Field observations on January 6 revealed that two small vents had opened and joined together on the SE inner wall of the SW crater.

Similar activity was reported throughout 2010 and the next notable episode happened during June/July 2011 with the Turrialba spewing out greater emission of gases with sound that appeared similar to a jet engine.

Another wave of eruptions started on January 12, 2012. OVSICORI-UNA reported that on January 11 local people around Turrialba heard several instances of rumbling. On January 12 an eruption occurred from a fissure on the SE flank of the main crater, in an area called La Quemada. An ash plume rose 500 m above the crater and drifted NNW, rising to an altitude of 4 km (13,000 ft) a.s.l. Later that day residents reported: a dark plume from La Quemada and a white vapor plume that rose from the fumarolic vent formed in the main crater on January 5, 2010.

According to a news article, the Turriabla National Park closed on January 12 and the CNE raised the Alert Level from Green to Yellow in the communities of La Central (34 km SW), Santa Cruz (7 km SE), and around the perimeter of the crater. Towns of Jiménez (21 km N), Oreamuno (45 km SW), Alvarado (38 km SW), and Cartago (25 km SW) remained at Alert Level Green.

The same agency reported that an eruption from Turrialba's West Crater on May 21, 2013 was preceded by seismic activity characterized by more than 150 volcanic earthquakes per day since April 18, 2013. Increased gas emissions were detected on May 20, 2013 producing a sky-blue plume visible from nearby areas. Hybrid earthquakes also increased and became numerous at 04:52 on May 21. Continuous harmonic tremor followed and then increased at 07:20. Eruptions from West Crater occurred at 08:30 and after 11:00 from two vents which opened in January 2010 (Boca 2010, on the W wall) and January 2012 (Boca 2012, on the E wall). The eruptions generated ash plumes that rose more than 500 m; ashfall was reported in the area of Picada (N), and in San José (35 km WSW) and Heredia (38 km W) of Ipís de Guadalupe, Goicoechea (28 km WSW), la Fazio, Zetillal (43 km W), San Isidro-San Pedro de Coronado, and San Luis de Santo Domingo (28 km W). At around 12:00 ash emissions ceased and seismicity decreased.

An increase in seismic activity was later observed in September 2014.