After five days of rain, Genovese rivers Bisagno, Rio Feregiano and Sturla burst its banks and flooded the streets. Heavy storm with torrential rain hit Italy at night on October 9, 2014. The Bisagno river burst its banks and the water has flooded the streets, dragging away parked cars. The water dumped more than a meter of gray mud in parts of city and surrounding areas.

Strong lightning activity has left half of the city in the dark. Shortly after midnight, river Sturla also overflowed. One person was confirmed dead in the overnight storm. According to the information of the Fire Department, 16 families have been evacuated.

Mayor of Genoa, Marco Doria stated that the Rio Fereggiano (which caused 6 deaths in November of 2011) is not overflown by the intensity of the rain, but a phenomenon of "regurgitation" caused by the thrust of the waters of Bisagno. This time the flooding hit right bank, and was much higher than that of 2011, which hit the left bank.

Storm has now moved inland from Genoa in Liguria. A tributary of the river is Scrivia overflowed at Campogrande Savignone on October 10, 2014. The level of the Scrivia began to rise again due to the heavy rains in the last few hours. Flooding caused landslide between Bolzaneto and Busalla that blocked the highway in the direction of Milan. On October 9, Scrivia river also burst its banks in Montoggio, ravaging the country. The Civil Protection of Regione Liguria extended the state of Alert hydrogeological 2, the maximum degree, up to October 11 for cities of Genoa, Savona and La Spezia. Alert hydrogeological 1 warning is issued for inland Savona.

Over this region, humid atmosphere has remained in place. Moisture values in the atmosphere in these areas are& two to four standard deviations above the mid-October average. Up to 305 mm (12 inches) of rain had fallen over only few hours in the Apennine Mountains north of the city, adding more water into Bisagno River, that helped it burst of its banks. The Italian civil protection department warned more rain was on the way. 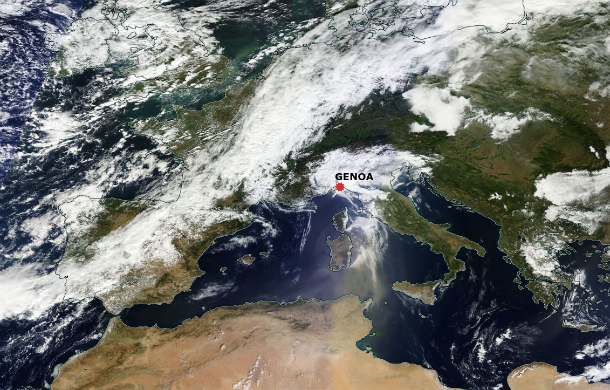