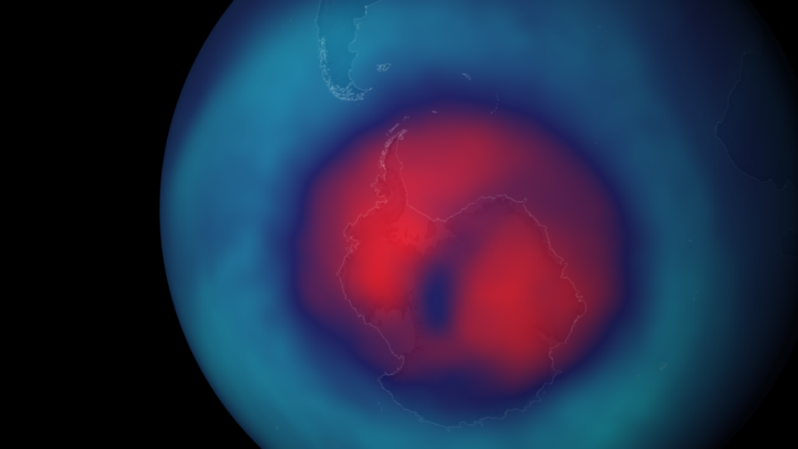 September 16, 2014 – The World Ozone Day, is meant to commemorate the success that has been achieved in ameliorating ozone depletion since the enactment of the Montreal Protocol, but also to bring attention to the work ahead.

In their first review in four years on Earth's vital shield, UN Environment Programme (UNEP) and the World Meteorological Organisation (WMO) said a 1987 treaty to protect the ozone layer was so successful it was indirectly adding to problems in another area – global warming. According to UN's report, without the landmark Montreal Protocol, two million extra cases of skin cancer would have occurred each year by 2030 and levels of ozone-damaging compounds could have increased tenfold by 2050.

Ozone in the stratosphere absorbs most of the ultraviolet radiation from the Sun. Without ozone, the Sun’s intense UV radiation would sterilize the Earth’s surface. Ozone screens all of the most energetic, UV-c, radiation, and most of the UV-b radiation. Ozone only screens about half of the UV-a radiation. Excessive UV-b and UV-a radiation can cause sunburn and can lead to skin cancer and eye damage.

The ozone hole is caused by extreme cold temperatures at high altitude but also by man-made chlorine compounds, such as coolants in air conditioners and refrigerators, insulation foams and propellants in hair sprays. Most of these substances, notably chlorofluorocarbons (CFCs) and halons, are being phased out on schedule under the Protocol, which has been ratified by all 197 UN members. 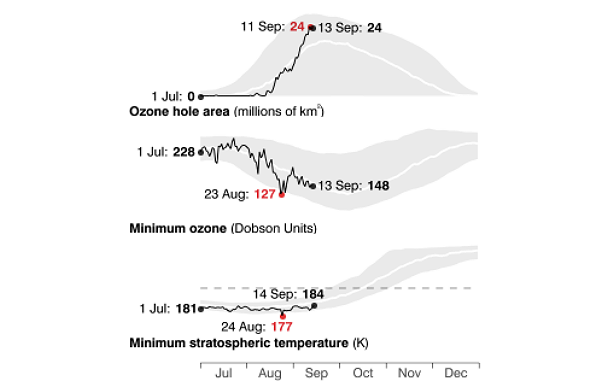 The graphs above show the progress of last season’s ozone hole. The gray shading indicates the highest and lowest values measured since 1979. The red numbers are the maximum or minimum observed values. The stratospheric temperature and the amount of sunlight reaching the south polar region control the depth and size of the Antarctic ozone hole. (Credit: NASA/GSFC/OzoneWatch)

Ozone depletion has contributed to cooling of the lower stratosphere and this is very likely the dominant cause of observed changes in Southern Hemisphere summertime circulation over recent decades, with associated impacts on surface temperature, precipitation, and the oceans. In the Northern Hemisphere, where the ozone depletion is smaller, there is no strong link between stratospheric ozone depletion and tropospheric climate.

The Assessment for Decision-Makers, a summary document of the Scientific Assessment of Ozone Depletion 2014, is being published by the United Nations Environment Programme (UNEP) and the World Meteorological Organization (WMO), and is the first comprehensive update in four years. The Scientific Assessment Panel is expected to present the key findings of the new report at the annual Meeting of the Parties to the Montreal Protocol, to be held in Paris in November 2014. The full body of the report will be issued in early 2015.

The pre-print version of the ADM can be downloaded here.

Featured image: Average total column ozone concentration over Antarctica for the week of September 7, 2014 taken from NOAA View. Areas colored red have dangerously low ozone concentrations, below 220 Dobson units, that are associated with the “hole” that forms over the region around September and October of each year. (Credit: NASA/SUOMI NPP)