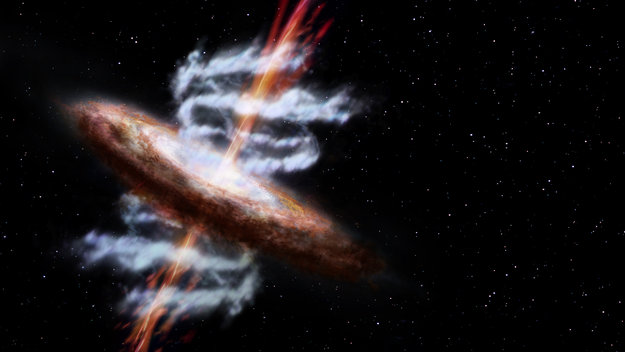 ESA has selected the Athena advanced telescope for high-energy astrophysics as its second ‘Large-class’ science mission.

The observatory will study the hot and energetic Universe and takes the ‘L2’ slot in ESA’s Cosmic Vision 2015–25 plan, with a launch foreseen in 2028.

By combining a large X-ray telescope with state-of-the-art scientific instruments, Athena will address key questions in astrophysics, including: how and why does ordinary matter assemble into the galaxies and galactic clusters that we see today? How do black holes grow and influence their surroundings?

Scientists believe that black holes lurk at the centre of almost all galaxies and that they play a fundamental role in their formation and evolution.

To investigate this connection, Athena will observe X-ray emission from very hot material just before it is swallowed by a black hole, measuring distortions due to gravitational light-bending and time-delay effects in this extreme environment. Athena will also be able to determine the spin of the black hole itself.

Athena’s powerful instruments will also allow unprecedented studies of a wide range of astronomical phenomena. These include distant gamma-ray bursts, the hot gas found in the space around clusters of galaxies, the magnetic interplay between exoplanets and their parent stars, Jupiter’s auroras and comets in our own Solar System.

“Athena will be a state-of-the-art observatory that will provide a significant leap forward in scientific capabilities compared with previous X-ray missions, and will address fundamental open questions in astrophysics,” says Alvaro Giménez, ESA’s Director of Science and Robotic Exploration.

“Its selection ensures that Europe’s success in the field of X-ray astronomy is maintained far beyond the lifetime of our flagship observatory XMM-Newton.”

The selection process for L2 began in March 2013, when ESA issued a call to the European science community to suggest the scientific themes to be pursued by the Cosmic Vision programme’s second and third Large missions.

Now officially selected for L2, Athena now moves into a study phase. Once the mission design and costing have been completed, it will eventually be proposed for ‘adoption’ in around 2019, before the start of construction.

After launch, Athena will travel to its operational orbit around the gravitationally semi-stable location in space some 1.5 million kilometres beyond Earth as seen from the Sun – a position coincidentally known as L2. ESA’s Herschel, Planck and Gaia missions have also used L2 orbits.