According to a statement from Bill Cooke of NASA's Meteoroid Environment Office, basketball-sized meteoroid entered Earth's atmosphere above Columbia, South Carolina, and then moved northwest at about 125 500 km/h (78 000 mph), burning up above Tennessee.

It traveled a distance of 467 km (290 miles), which is quite rare for a meteor. "This fireball was not part of any meteor shower and belongs to a class of meteors called Earthgrazers. These meteors skim along the upper part of the atmosphere before burning up," Cooke said.

According to AMS, the fireball was seen from primarily Kentucky and West Virginia but witnesses from Albama, Georgia, Indiana, Ohio, South Carolina, Tennessee and Wisconsin also reported seeing the fireball.

Below is their map of the estimated trajectory: 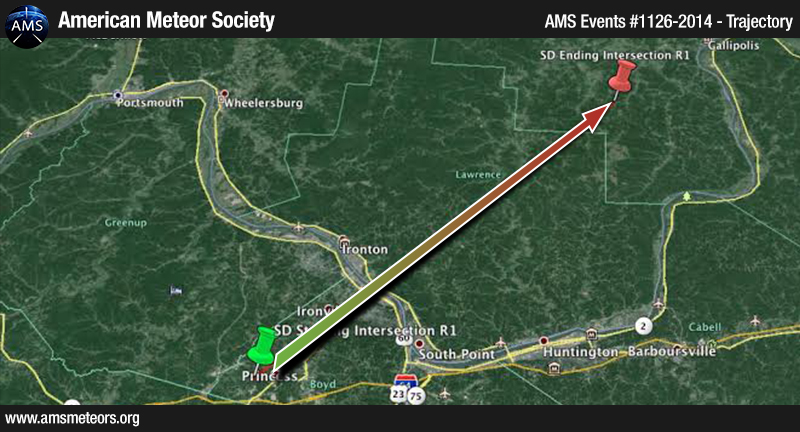 A similar event was observed over Queensland, Australia, on May 15, 2014 at 06:52 UTC. Astronomer Owen Bennedick, from Wappa Falls Observatory in Yandina on the Sunshine Coast, suggested the object was not a meteor but more likely part of a satellite re-entering the Earth's atmosphere.

David Finlay, an amateur astronomer from Queensland, is convinced that the object is in fact a meteorite. He called everyone to help calculate the landing spot.

Although the two events might not be related, they come a week before a new meteor shower and a possible meteor storm. Astronomers say that on May 24 Earth will possibly pass through the dust trail left by Comet 209P/LINEAR in its past orbits.

This is a new meteor shower named May Camelopardalids.

Predictions run from less than 100 meteors per hour up to unlikely, but possible, meteor storm as high as 1000 per hour.