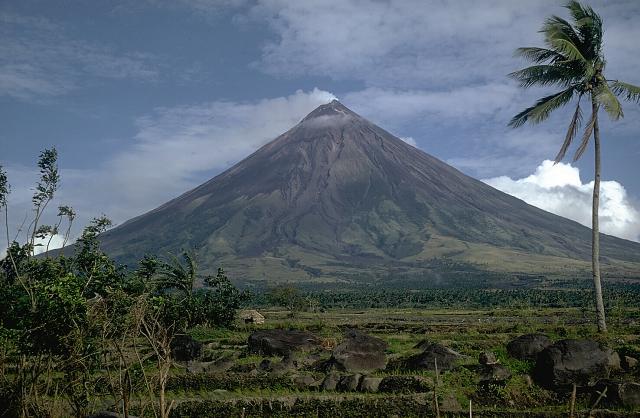 Taal and Mayon volcanoes seismic network recorded one volcanic earthquake at each volcano during the past 24-hour observation period, PHIVOLCS reported on April 16, 2014. It is strongly advised that the public refrain from entering 6-kilometer radius of Mayon. Main Crater of Taal volcano should be strictly off-limits.

Steaming activity at Mayon could not be observed due to thick clouds that covered the summit. No crater glow was observed last night. ·Sulfur dioxide (SO2) flux was measured at an average of 595 tonnes/day on April 4, 2014. Geodetic results from ground deformation survey (precise leveling) on the 3rd week of February 2014 showed deflationary changes in the edifice from November 2013 and a return to 2010 baselines. Nonetheless, tilt data show that the edifice is still inflated compared to January 2012 baselines.

Mayon Volcano’s alert status remains at Alert Level 1, which means that it is at abnormal condition. Although this means that presently no magmatic eruption is imminent, it is strongly advised that the public refrain from entering the 6-kilometer radius Permanent Danger Zone (PDZ) due to the perennial life-threatening dangers of rockfalls, landslides/avalanches at the middle to upper slope, sudden ash puffs and steam-driven or phreatic eruptions from the summit. Active stream/river channels and those identified as perennially lahar-prone areas on all sectors of the volcano should also be avoided especially during extreme weather conditions when there is heavy and prolonged rainfall. DOST-PHIVOLCS maintains its close monitoring of Mayon Volcano and any new development will be communicated to all concerned stakeholders. (PHIVOLCS)

Field measurements at Taal volcano on April 11, 2014 at the western sector of the Main Crater Lake recorded an increase in water temperature of 31.0°C from 30.4°C, a decrease in water level of 0.45 meter from 0.51 meter, and a decrease in water acidity of pH 2.90 from pH 2.64. Ground deformation survey in the Volcano Island during February 10 – 21, 2014 yielded slight deflation at Calauit, Alas-as, Pira-piraso, Daang Kastila and New Eruption Site precise leveling lines compared to the December 2013 survey. GPS data from December 2013 to end of March 2014 showed slight deflationary changes in ground deformation. However, the edifice is still slightly inflated in general compared to February 2011 baseline data. Carbon dioxide (CO2) emission at the Main Crater Lake increased to 675 tonnes per day on 25-28 February 2014 compared to 500 tonnes per day last 27 January 2014.

Alert Level 1 remains in effect over Taal Volcano. This means that hazardous eruption is not imminent. The public, however, is reminded that the Main Crater should be strictly off-limits because sudden steam explosions may occur and high concentrations of toxic gases may accumulate. The northern portion of the Main Crater rim, in the vicinity of Daang Kastila Trail, may also become hazardous when steam emission along existing fissures suddenly increases. Furthermore, the public is also reminded that the entire Volcano Island is a Permanent Danger Zone (PDZ), and permanent settlement in the island is strongly not recommended. (PHIVOLCS)

Beautifully symmetrical Mayon volcano, which rises to 2462 m above the Albay Gulf, is the Philippines' most active volcano. The structurally simple volcano has steep upper slopes averaging 35-40 degrees that are capped by a small summit crater. The historical eruptions of this basaltic-andesitic volcano date back to 1616 and range from strombolian to basaltic plinian, with cyclical activity beginning with basaltic eruptions, followed by longer term andesitic lava flows.

Eruptions occur predominately from the central conduit and have also produced lava flows that travel far down the flanks. Pyroclastic flows and mudflows have commonly swept down many of the approximately 40 ravines that radiate from the summit and have often devastated populated lowland areas. Mayon's most violent eruption, in 1814, killed more than 1200 people and devastated several towns. (GVP) 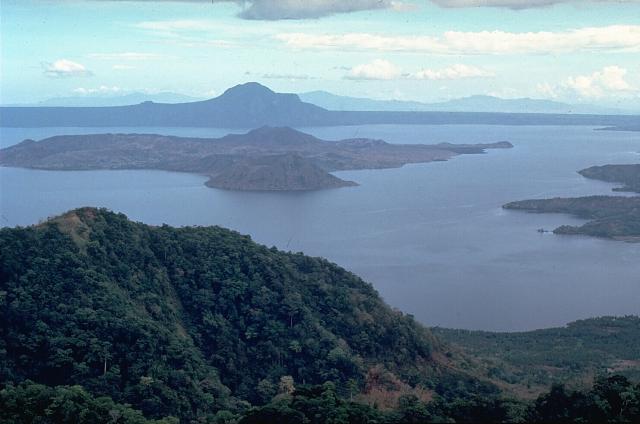 Taal volcano is one of the most active volcanoes in the Philippines and has produced some of its most powerful historical eruptions. In contrast to Mayon volcano, Taal is not topographically prominent, but its prehistorical eruptions have greatly changed the topography of SW Luzon. The 15 x 20 km Talisay (Taal) caldera is largely filled by Lake Taal, whose 267 sq km surface lies only 3 m above sea level.

The maximum depth of the lake is 160 m, and several eruptive centers lie submerged beneath the lake. The 5-km-wide Volcano Island in north-central Lake Taal is the location of all historical eruptions. The island is a complex volcano composed of coalescing small stratovolcanoes, tuff rings, and scoria cones that has grown about 25% in area during historical time. Powerful pyroclastic flows and surges from historical eruptions of Taal have caused many fatalities. (GVP)