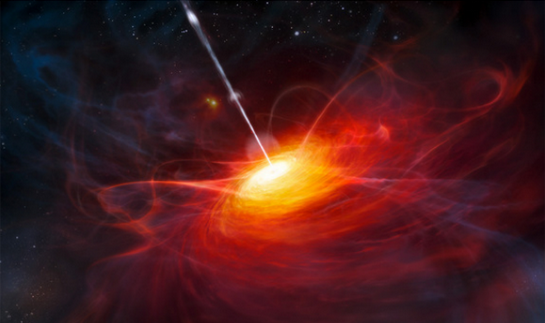 In other words, these circular gaps are open field lines formed in the most active regions on the surface of a dense plasma environment. It is a phenomenon structured and ruled by magnetism. It is similar to the formation of sunspots and coronal holes. Sunspots are magnetic phenomena as well. They are regions of very strong magnetic fields where the field lines get so crowded together that they push up through the surface, bringing some of the hot plasma with them in a spectacular arc, or loop. Basically, the strong magnetic field, not allowing motions across the field lines, quenches convection inside the spot. They are darker than the surrounding areas because they are expending less energy and as a result have a lower temperature. The spots formed on the surface of the Sun have also been seen on other stars.

Therefore, these gaps that are surrounded by intense magnetic fields do not only exist at the center of galaxies, galaxy clusters and superclusters, etc, but also whenever the magnetic field (in space plasma) becomes stronger compared to its surroundings. In case of a very dense plasma, like the ones at the center of galaxies and large scale structures, the strength of the magnetic field is so enormous at the core compared with the rest of the galaxy; this is the reason why always a single gap is formed at these regions. But there are no reasons why no more than one gap can be formed.

Thus, both the place of formation and strength of these gaps depend on the distribution of the plasma density. The higher the density of the plasma, the more intense the magnetic field and the more powerful the magnetic force around these regions. The strongest magnetic field region should be formed at the most dense part of the universe; however, those circular gaps surrounded by super-intense magnetic fields are the sources of the highest type of cosmic radiation. It is also estimated that more than a quarter of the total radiation emitted in the universe as a whole is coming from these super-intense magnetic field regions that are located mainly at the galactic cores and the centers of large scale structures.

In current physics, those regions are supposed to be the locations of the supermassive black holes. But actually what is lighting up and powers the cosmos is the interaction of magnetic fields at those regions. Furthermore, the Active Galactic Nucleus (AGN) that are supposed to be the place for the biggest kind of black super suckers are, in physical reality, the generation and regeneration centers of the universe. These regions are the birthplaces of stars and quasars that would evolve into companion galaxies. 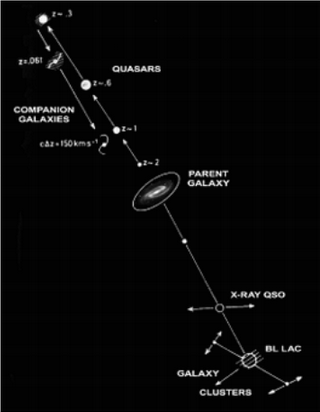 "Astronomer Halton Arps model of galactic ejection: High-redshift quasars are ejected from an active galactic nucleusoften in pairs in opposite directions along the galaxys spin axis. As they move away from the galaxy, their redshifts decrease, their mass increases, and they slow down. As they fall back toward the galaxy, their matter differentiates into stars, and they evolve into companion galaxies or galactic clusters, whose redshifts continue to approach, stepwise, the redshift of the parent galaxy."

The current black hole theory is a modern physics myth. There are two main reasons for this myth and other dark myths (dark matter and dark energy). The first is the lack of understanding of the physical principle of gravity and the failure to comprehend its true role in the structure of matter. The second is the intervention of unscientific mathematical theories in physics. Those mathematical theories were adopted by physicists without real evaluation. Most of those theories are wrong even on purely mathematical grounds (from a mathematical point of view).

Quantum mechanics and theory of relativity (both general and special) did not fix the defects of Newtonian physics but instead complicated them and at the same time introduced pseudo physics material based on mathematical fiction and mathematical probability. These pseudo physics theories, in addition to the Big Bang cosmology that dismisses the physics principle of no creation from nothing, have created an imaginary universe. It is totally different from the universe we are living in and where we can observe so much of its structure and energetic behaviour.

Understanding gravity in the content of the magnetic structure of matter and accepting the extreme strength of the magnetic force in the center of galaxies and large scale structures would explain all activities and observations at those locations without resort to the gravitational beast -the black hole myth that resembles a giant ghost more than just a physical object. In fact, all observed phenomena that required the invention of the dark myth theories or the other ones still considered mysteries and without any theoretical notions can easily be explained if the real building blocks of matter, and the force which is permanently present in them, can be understood.

In my understanding, the building blocks of matter have to be pairs of magnetic monopoles that are in helical motion (one rotating clockwise, the other anticlockwise). All subatomic interactions are characterized by strong inter-relation and magnetic nature. The so-called weak and strong interactions are in fact governed by the same force. All charged particles and neutral hadrons participate in electromagnetic interactions and even quite different types of particles have very similar magnetic properties. The universal inter-dependence, inter-relation, inter-conversion and common magnetic properties of elementary particles clearly demonstrate that they are all formed from a single magnetic substance. The electron and the rest of the so-called elementary particles, including quarks, are structured or composed of these magnetic monopoles.

There are several indications that show the electron and the quarks to be composed particles rather than elementary ones. Most of their properties show the permanent presence of the magnetic force, and that they are composed particles rather than elementaries. For instance, why do all elementary particles spin? In addition to the above, the way particles and subatomic particles are structured is further evidence showing the building blocks of matter as pairs of magnetic monopoles. Particles and subatomic particles can be coherently structured in only three possible ways. One type has a higher number of left-hand rotations; this is what we call a negatively charged particle. The other type has a higher number of right-hand rotations; this is what we call a positively charged particle. The third kind is formed from an equal number of left-handed and right-handed charges and this is what we call a neutral particle. Properties of atoms, particles and subatomic particles are defined by the number of these pairs of magnetic monopoles, their orientations and how they are structured to form a coherent object.

The force that governs these charges, and which is also permanently present in them, is the only absolute physical reality; everything else is only an appearance and manifestation of the magnetic structure of matter (MSM). This force is an internal and inseparable feature of them. Any other force in nature is just a manifestation of it. More importantly, the permanent presence of the magnetic force in the building blocks of matter is the only way that allows the universe to exist as a coherent entity.​

Get the full research paper