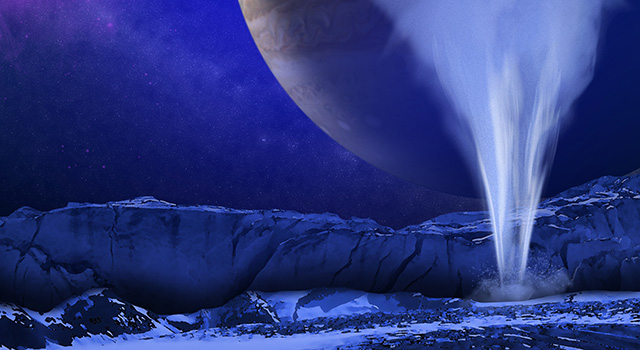 Data from the Hubble space telescope suggests that enormous jets of water, more than 200 kilometers tall, may be spurting intermittently from the surface of Europa, ice-shelled moon of Jupiter.

Although it’s been known since 2005 that Saturn’s moon Enceladus has geysers spewing ice and dust out into orbit this is the first evidence of similar jets on Europa. This makes two known places in our Solar System where subsurface oceans could be getting sprayed directly into space — and within easy reach of any passing spacecraft.

So far, only water vapour has been detected — unlike the plumes on Enceladus, which also contain ice and dust particles.

​Previous scientific findings from other sources already point to the existence of an ocean located under Europa's icy crust, which makes it one of the main targets in the search for habitable worlds away from Earth. Researchers are not yet fully certain whether the detected water vapor is generated by erupting water plumes on the surface, but they are confident this is the most likely explanation.

The 200 km (125 mile) high plumes were discovered with Hubble observations made in December 2012. Its Imaging Spectrograph (STIS) detected faint ultraviolet light from an aurora at the Europa’s south pole. Europa’s aurora is created as it plows through Jupiter’s intense magnetic field, which causes particles to reach such high speeds that they can split the water molecules in the plume when they hit them. The resulting oxygen and hydrogen ions revealed themselves to Hubble with their specific colors.

“We found that one blob of emission at Europa’s south pole was always there over the 7 hours we observed and always at the same location,” said astronomer Lorenz Roth of the Southwest Research Institute in Texas and co-author of a paper about the research appearing today in Science.

“By far the simplest explanation for this water vapor is that it erupted from plumes on the surface of Europa. If those plumes are connected with the subsurface water ocean we are confident exists under Europa's crust, then this means that future investigations can directly investigate the chemical makeup of Europa's potentially habitable environment without drilling through layers of ice. And that is tremendously exciting." (HST)

The findings were announced today during the meeting of the American Geophysical Union in San Francisco.