Coastal areas of eastern India are being evacuated as Super Cyclonic Storm Phailin approaches in full strength. Landfall is forecast around 12:00 UTC on Saturday, October 12, 2013. This is the fiercest cyclone to threaten the country since a devastating storm killed 10 000 people 14 years ago. State government said they are now better prepared.

Data supplied by the JTWC suggest that the point of landfall will be near 18.8 N, 85.1 E, northeast of Visakhapatnam (Odisha state). The storm is expected to bring 1-minute maximum sustained winds to the region of around 259 km/h (161 mph). Wind gusts of up to 305 km/h are expected at the time of landfall.

GDACS said this tropical cyclone is expected to have a high humanitarian impact based on the storm strength and the affected population in the past and forecasted path. Up to 7.6 million people people can be affected by wind speeds of cyclone strength or above. In addition, 64 000 people people are living in coastal areas below 5 m and can therefore be affected by storm surge.

Government is broadcasting cyclone warnings through loudspeakers and on radio and television as the first winds were felt on the coast and in the state capital, Bhubaneswar.

Indian authorities warned of extensive damage to crops, village dwellings and old buildings, as well as disruption of power, water and rail services. Shelters were being stocked with rations, and leave for government employees was canceled.

"Phailin will be no less than the 1999 super cyclone," Odisha state's Special Relief Commissioner, Pradeep Kumar Mohapatra, told Reuters. He said half a million people were expected to move to shelters in the state.

"Within 12 hours of the cyclone strike, we will try to clear all the roads. Within 24 hours we will try to restore water supply and electricity," Mohapatra said. 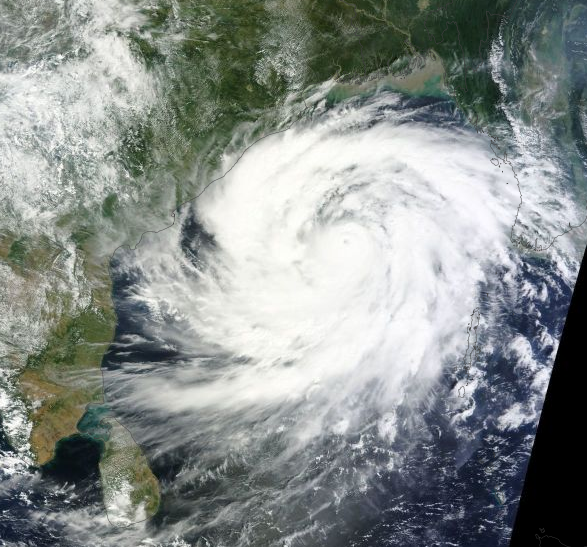 By latest JTWC report issued at 15:00 UTC today, Phailin was located approximately 356 NM (659 km) south of Kolkata, India, and has tracked northwestward at 09 knots over the past 6 hours. Animated multi spectral satellite imagery (MSI) depicts an intense cyclone with a slightly-consolidated symmetric eye, approximately 9 NM in diameter, with multiple deep convective bands spiraling out from the circulation center. 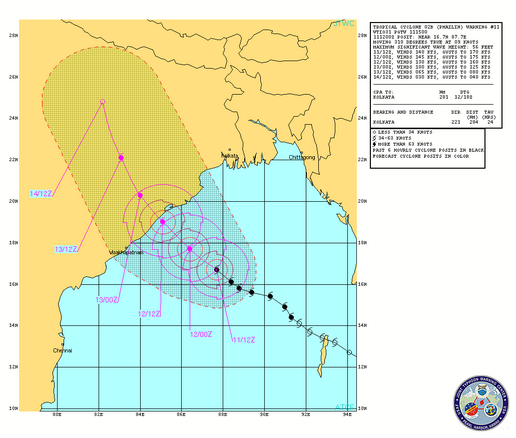 Phailin is forecast to continue tracking northwest across the remainder of the Bay of Bengal and make landfall northeast of Visakhapatnam, India.

After landfall, it will rapidly erode as it tracks across the rugged terrain of northern India, dissipating in next 72 hours.