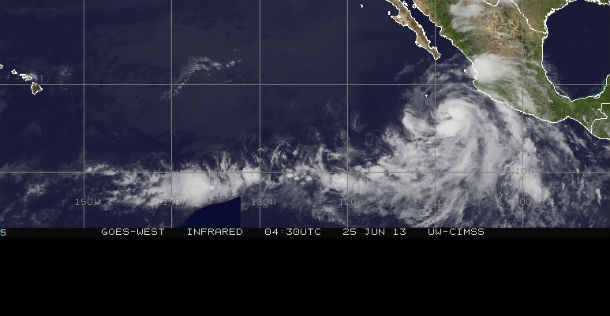 According to latest public advisory issued by US National Hurricane Center (NHC) at 3:00 UTC on June 24, 2013, the center of Tropical Storm Cosme was located near latitude 15.9 north and longitude 107.9 west, about 320 miles (515 km) SW of Manzanillo, Mexico. Maximum sustained winds have increased to near 65 mph (100 km/h.) with higher gusts. Additional strengthening is forecasted and Cosme is expected to become a hurricane on June 25, 2013. Tropical storm force winds extend outward up to 175 miles (280 km) from the center. The estimated minimum central pressure is 994 mb (29.35 inches). Cosme is moving northwestward near 14 mph (22 km/h).

A turn toward the west-northwest is expected during June 25, 2013 and this motion should continue through the next 48 hours. The environment around the tropical cyclone should be conducive for continued intensification for the next 24 hours. After that, the cyclone should quickly weaken as it enters into much colder waters.

Cosme is forecasted to become a remnant low after the next 96 hours. Cosme continues to move northwestward along the southwestern periphery of a mid-level ridge over northern Mexico and the southwestern United States. According to NHC, while the ridge builds during next 24 hours, Cosme should turn toward the west-northwest and remain on that heading for several days. Beyond 72 hours, the low-level remnants of Cosme are expected to move westward, following the low-level trade winds.

Surfs and swells generated by Cosme are affecting portions of the Pacific coast of Mexico from near Manzanillo through Cabo Corrientes. These swells are likely to cause dangerous surf and rip current conditions. 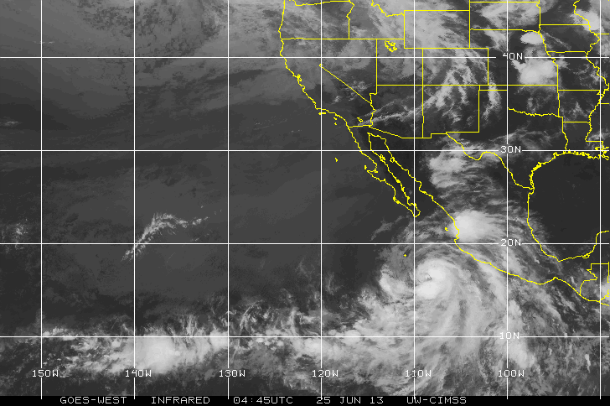