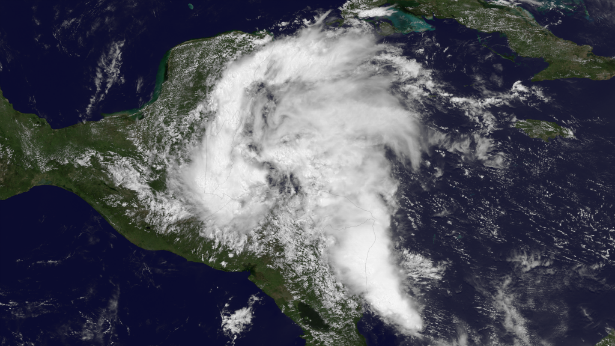 A tropical disturbance moving from the western Caribbean toward southeastern Mexico became Tropical Depression Two near the coast of Belize on June 17, 2013. The clouds associated with the depression stretch much farther, from far western Cuba, to the eastern Yucatan Peninsula, and over Belize and Honduras. The primary concern with this system is heavy rainfall which could cause significant flooding over portions of Central America and eastern Mexico. There is a chance that the system becomes Tropical Storm Barry before reaching mainland Mexico. 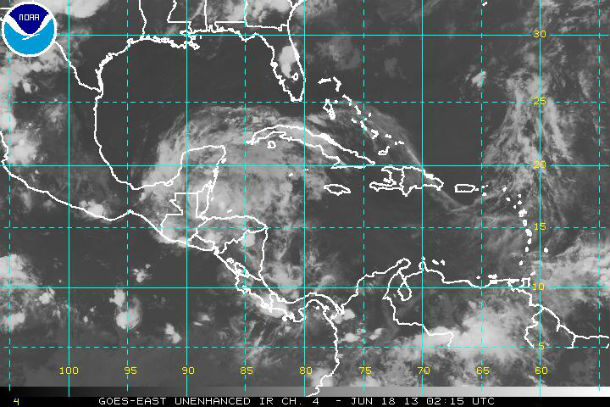 According to the latest public advisory issued by National Hurricane Center (NHC) at 21:00 UTC on June 17, 2013, the center of Tropical Depression Two was located near latitude 16.4 north and longitude 88.4 west. The depression is moving toward the west-northwest at near 12 mph (19 km/h) and this general motion with a decrease in forward speed is expected over the next couple of days. 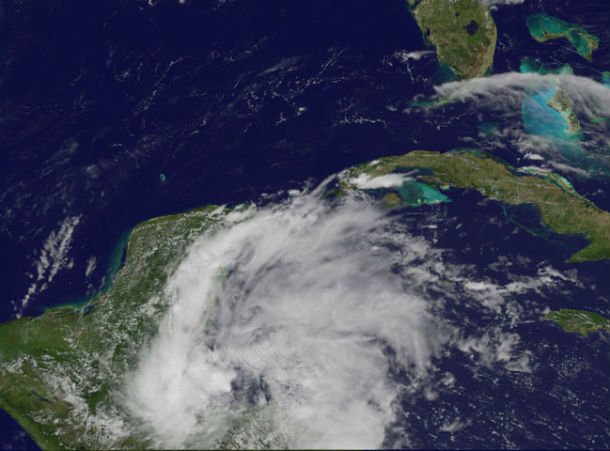 NOAA's GOES-13 satellite captured an image of Tropical Depression 2 on June 17, 2013. Looking closely at the imagery, strong thunderstorms are firing up around the center of circulation, just off-shore from Belize. The clouds associated with the depression stretch much farther, from far western Cuba, to the eastern Yucatan Peninsula, and over Belize and Honduras. (Credit: NOAA/NASA GOES Project)

The center will move over Belize, northern Guatemala tonight and over eastern Mexico during the next 24 hours. The depression could emerge into the southern Bay of Campeche by early June 19, 2013 and could strengthen due the warm waters on both side of the peninsula that could fuel the system after making landfall. The potential for development will increase, prior to a second landfall over the Mexico mainland. There is a chance that some of the moisture from the system is funneled into parts of south and west Texas late in the week well after the second landfall. 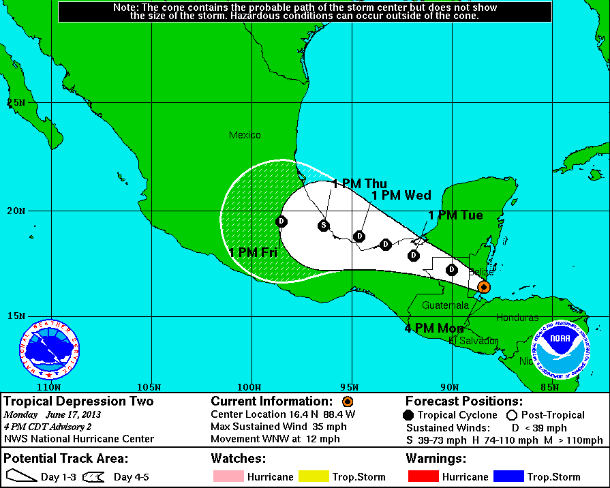 The global models show the east-West Ridge weakening, but remaining in place over the northern Gulf of Mexico during the next few days. This should maintain the west-northwestward heading with a slowing of forward speed during the next 48-72 hours. 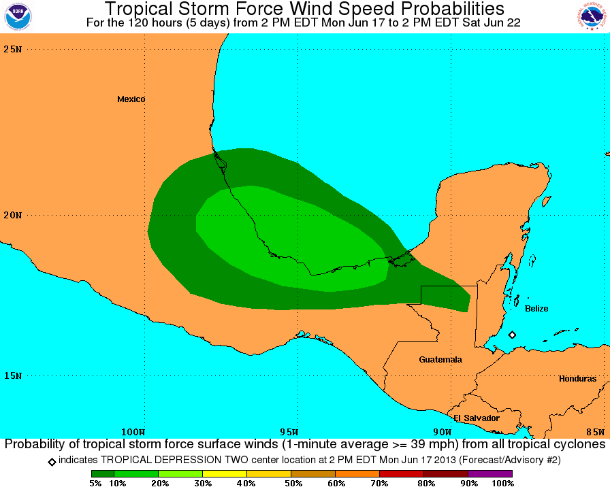 The depression is expected to produce total rainfall accumulations of 2 to 4 inches with maximum amounts of 6 inches across portions of Belize, Guatemala and northern Honduras, along with the Mexican states of Chiapas, Tabasco, Veracruz and the southern Yucatan Peninsula. These rains could cause flash flooding, especially in mountainous areas.

The system will unleash torrential rainfall and the potential for flooding and mudslides in the region.