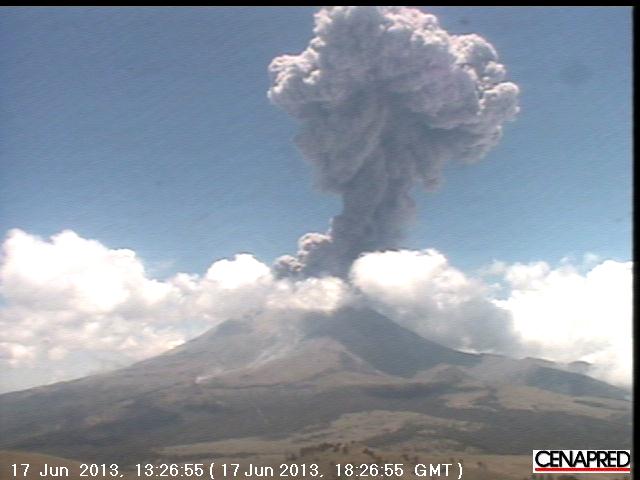 According to CENAPRED a strong eruption at 18:23 UTC on June 17, 2013 generated an ash column over 4 km in height over Mexican Popocatepetl volcano. Incandescent fragments were released up to 2 km from the crater, and because of their high temperature caused small fires in the grasslands.

In addition to this event, there were also 144 exhalations of low and moderate intensity in the last 24 h, which were accompanied by the emission of steam, gas and ash occasionally.

The eruption column predominantly moved in the western-southwestern direction. Throughout the night of June 18 there was no clear view of the volcano. CENAPRED reports a slight emission of steam and gas that is directed to the southwest, observed at 15:55 UTC today (image below). 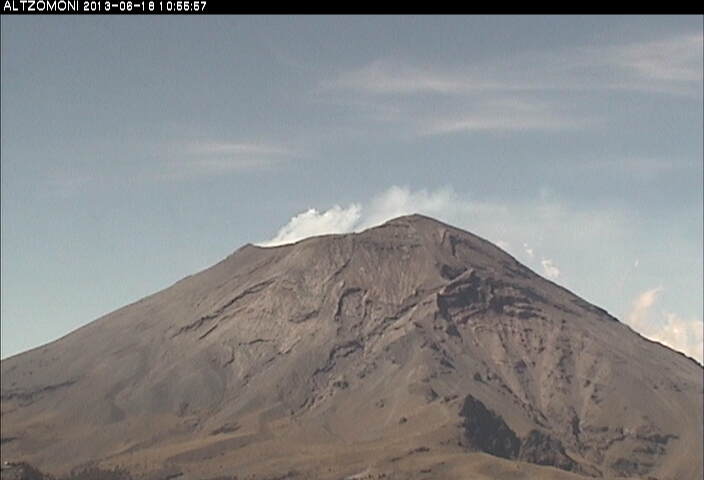 Emphasis is placed on the following recommendations: 1. Continue the safety radius 12 km, so that staying in that area is not allowed. 2. Keep Xalitzintla controlled traffic between Santiago and San Pedro Nexapa, via Paso de Cortes. 3. A Civil Protection authorities, maintain preventive procedures, according to their operational plans. 4. A people, being attentive to the official information is disseminated. Popocatepetl Volcano monitoring is performed continuously 24 hours. Any change in activity will be reported in due course.

Here is an amazing video of the latest eruption at Popocatepetl volcano, Mexico: