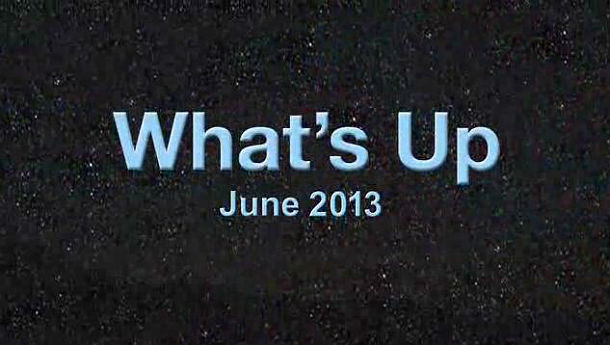 The month begins with a gorgeous trio of planets: Mercury, Venus and Jupiter, low on the west-northwest horizon. As the month progresses, Jupiter slips into the sunset while Mercury and Venus rise higher in the sky.

Asteroid 1998 QE2, which safely passed by Earth on May 31, is visible in the night skies only through medium sized or larger telescopes. Amateur astronomers looking towards the constellations Libra and Ophiucus the first week of June can watch it move about the diameter of a full moon in an hour and a half.

The first four asteroids ever discovered: Ceres, Vesta, Pallas and Juno are all visible this month and are all about magnitude 8 or 9, requiring binoculars or telescopes.These four are Main Belt asteroids. That means they orbit only in the area between Mars and Jupiter so they pose no threat to Earth. Ceres and Vesta can be found near the stars of the constellation Gemini. Pallas is only visible from the Southern Hemisphere before dawn this month. Juno can be found among the stars of Aquarius, as can asteroid Bamberga.

Asteroid 324 Bamberga is the 15th-largest asteroid as measured by its diameter, but it was one of the last large asteroids to be discovered nearly a hundred years after the first four were discovered in the early 1800's.

On June 11 we might witness the return of a rare meteor shower called the gamma Delphinids radiating from the tiny dolphin-shaped constellation Delphinus. The best part of the sky to watch is usually an area about 30 degrees away from the radiant point of the shower.

Wrap up the month with a trip out of town. By month-end the moon will not rise until midnight, and you'll have a great view of the Milky Way rising in the East, spanning the sky from horizon to horizon.