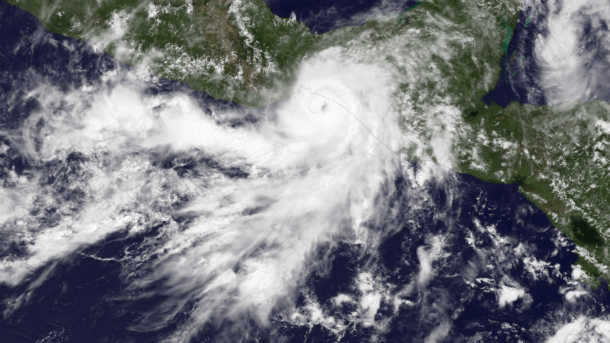 Tropical Storm Barbara weakened after landfall as Category 1 hurricane at southern Mexico coastline near Tonala in Chiapas State on May 29, 2013. Latest satellite images and surface observations indicate that Barbara no longer has a well-defined center of circulation so it no longer qualifies as a tropical cyclone. 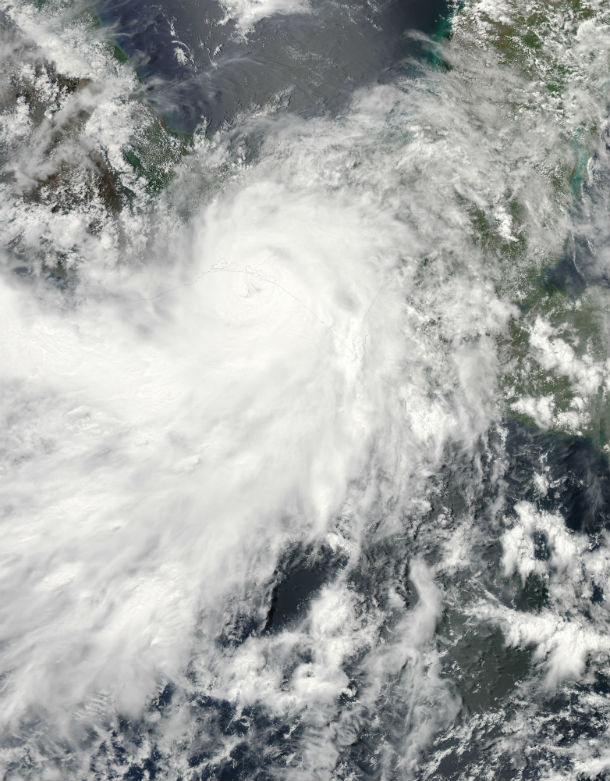 MODIS instrument aboard NASA’s Aqua satellite captured a visible image of Hurricane Barbara as it was making landfall in southwestern Mexico. The image was taken at 19:30 UTC on May 29, 2013. The image showed a large “tail” of thunderstorms that extended into the eastern Pacific Ocean.  (Credit: NASA Goddard MODIS Rapid Response Team)

Tropical Storm Barbara shortly strengthened into a hurricane with maximum sustained winds near 75 mph just before it made landfall, and shortly after it weakened into a tropical depression. NASA satellite imagery showed that cloud tops warmed and thunderstorms became more fragmented around the storm's center after Barbara made landfall. 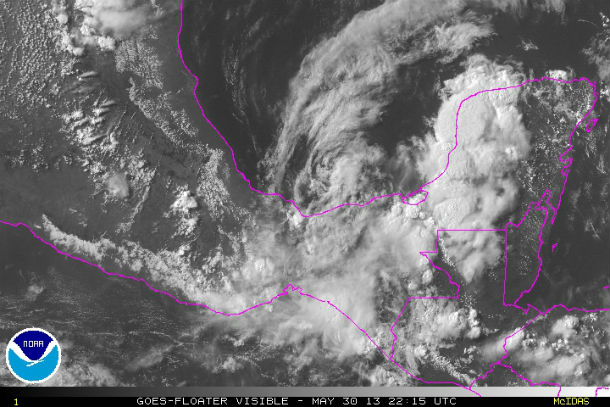 According to latest public advisory issued by US National Hurricane Center (NHC), on May 30, 2013 at 21:00 UTC, the center of Tropical Depression Barbara was located near latitude 18.5 north and longitude 94.5 west. The remnants are moving toward the north-northwest at speed of 3 mph (6 km/h).

Maximum sustained winds decreased to 25 mph (5 km/h) with higher gusts.The estimated minimum central pressure is 1005 mB (29.68 inches). Barbara was the most easterly landfall of a Pacific hurricane since 1966. 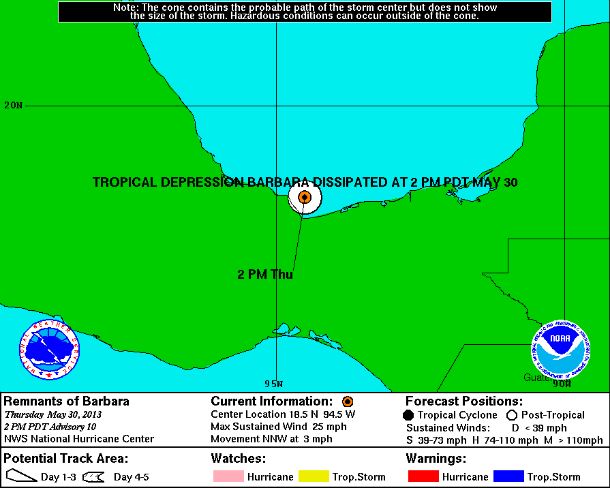 The storm unleashed flooding rain and damaging winds over southern Mexico with three reported deaths. State civil defense officials reported fourteen fishermen from the town of Tapanatepec,Oaxaca, were missing. City of Arriaga, located in the State of Chiapas, recorded a rainfall total of 16.02 inches (407 mm) on May 30, 2013.

Although the cyclone has dissipated, disturbed weather associated with the remnants of Barbara is likely to persist over southeastern Mexico and portions of Central America for the next several days. The National Hurricane Center (NHC) expects Barbara to produce total rain accumulations of 6 to 10 inches with isolated maximum amounts of 20 inches possible over portions of southeastern Mexico, bringing storm totals in excess of 25 inches. These rains could cause life-threatening flash floods and mud slides.

Featured image: Satellite image of Barbara as Category 1 hurricane at time of landfall at 18:15 UTC on May 29, 2013 (Credit: NOAA/GOES East)