With the help of images acquired by NASA's Mars Reconnaissance Orbiter, scientists have estimated that the Red Planet is bombarded by more than 200 small asteroids or fragments of comets every year which form craters at least 3.9 meters wide. During the past decade experts have discovered 248 new impact sites on parts of Martian surface, using images from the spacecraft to figure out when the craters appeared.The estimate of 200 impacts per year across the surface of Mars is a calculation that is based on the number found in a systematic survey of a portion of the planet. 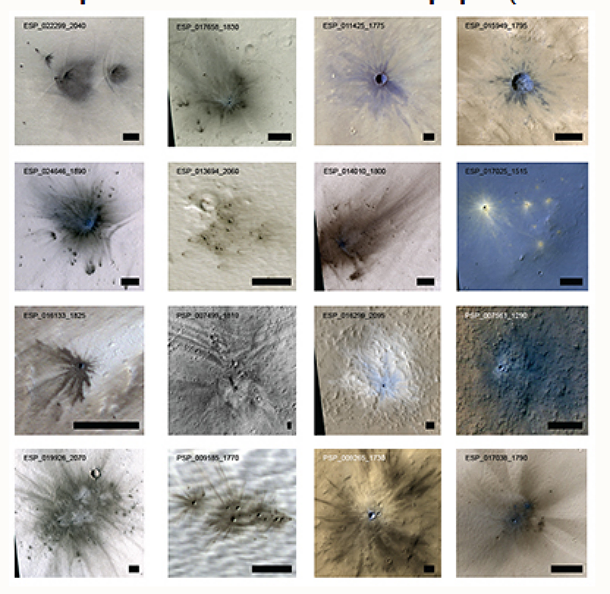 Photographs were taken by the orbiter's High Resolution Imaging Science Experiment (HiRISE) camera of newly formed craters at sites where before-and-after images by other cameras helped determine when the impacts happened. This method enabled scientists to make direct measurements of the impact rate on Mars in a new way. Also this will lead to more precise age estimates of recent features on Mars, some of which may have occurred due to climate change.

It's exciting to find these new craters right after they form, it reminds you Mars is an active planet, and we can study processes that are happening today, said Ingrid Daubar of the University of Arizona, Tucson, lead author of the paper published online this month by the journal Icarus. In diameter, these asteroids or comet fragments are usually no more than 1 to 2 meters wide. It is because of the thinner atmosphere on Mars that these space rocks, that are too small to reach the ground on Earth, can cause craters on the Red Planets surface.

HiRISE targeted areas where dark spots had occurred in the time between images taken by the spacecraft's Context Camera (CTX) or cameras on other orbiters. This new estimate of cratering rate is established on a portion of the 248 new craters detected. It originates from a systematic check of a dusty part of the planet with CTX since late 2006.The impacts disturb the dust and create visible blast zones. In this portion of the research, 44 new impact sites were discovered. 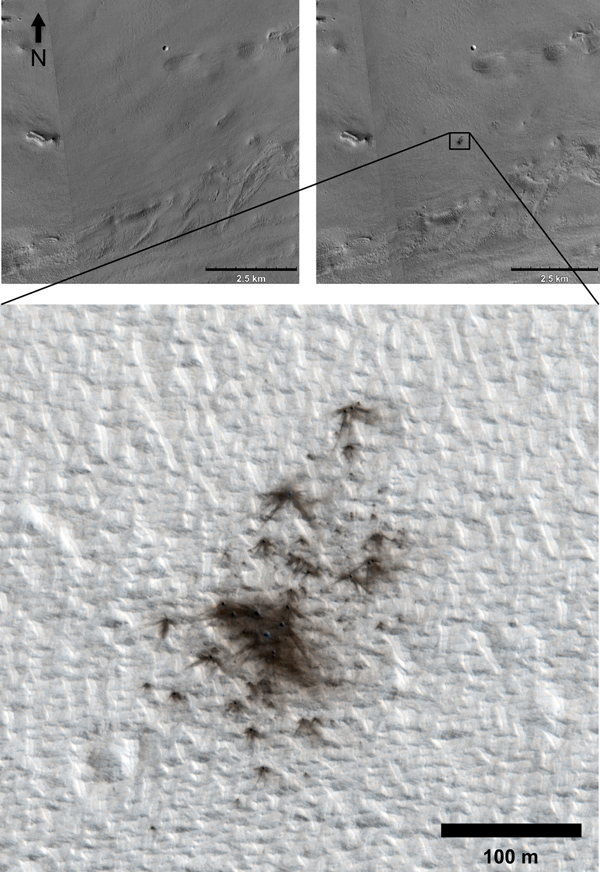 This set of images from cameras on NASA's Mars Reconnaissance Orbiter documents the appearance of a new cluster of impact craters on Mars. The orbiter has imaged at least 248 fresh craters, or crater clusters, on Mars. The two upper images are from the orbiter's Context Camera (CTX). The upper-right image, taken on May 24, 2011, shows a dark patch at the center that is not present in the upper-left image, taken Aug. 15, 2010. The scale bar on each of these two images is 2.5 kilometers (1.6 miles). The location on Mars is 4.472 degrees north latitude, 246.893 degrees east longitude. Due to the dust blanketing the ground in this region, impacts produce a dark-looking blast zone where the dust is disturbed. Image credit: NASA/JPL-Caltech/MSSS/Univ. of Arizona

The Chelyabinsk meteor was approximately 10 times larger than the objects that created the fresh Martian craters. Estimates of the rate of appearance of the new craters are precious for scientists trying to determine the ages of exposed landscape surfaces on Mars and other worlds.

Daubar and co-authors calculated a rate for how often new craters at least 3.9 meters wide are dug.The rate is analogous to an average of one every year on each area of the Martian surface similar the size of Texas.Former estimates, that were built on studies of craters on the moon and the ages of lunar rocks collected during NASA's Apollo missions in the late 1960s and early 1970s, calculated the cratering rate at three to 10 times more craters per year.

According to HiRISE Principal Investigator Alfred McEwen of the University of Arizona, and a co-author on the paper, Mars now has the best-known current rate of cratering in the solar system.

Featured image: One of many fresh impact craters spotted by the UA-led HiRISE camera, orbiting the Red Planet on board NASA's Mars Reconnaissance Orbiter since 2006. (Photo: NASA/JPL-Caltech/MSSS/UA)