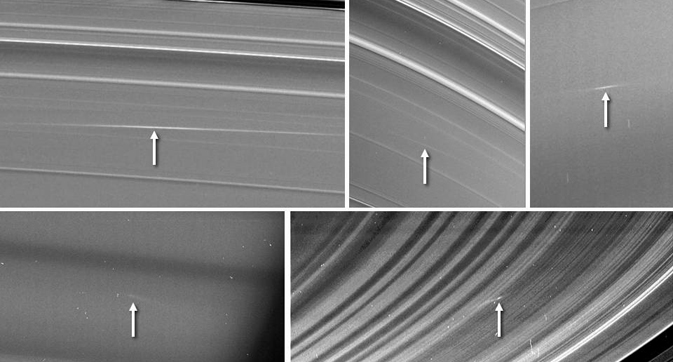 New results from NASA's Cassini spacecraft show that small meteoroids are breaking into streams of rubble and crashing into Saturn's rings.

Saturn's rings are the only place besides Earth, the moon, and Jupiter where researchers along with amateur astronomers have been able to observe impacts as they happen, as this new observations show.

By studying the impact rate of meteoroids from outside the Saturn's system scientists can better understand how different planet systems in the Solar System formed.

There are a lot of small, speeding objects in our Solar System. Planetary bodies are very often pummeled by them. The meteoroids at Saturn measure from about one-half inch to several yards (1 centimeter to several meters) in size. Experts needed years to distinguish tracks left by nine meteoroids in 2005, 2009 and 2012.

Five images of Saturn's rings, taken by NASA's Cassini spacecraft between 2009 and 2012, show clouds of material ejected from impacts of small objects into the rings. Clockwise from top left are two views of one cloud in the A ring, taken 24.5 hours apart, a cloud in the C ring, one in the B ring, and another in the C ring. Arrows in the annotated version point to the cloud structures, which spread out at visibly different angles than the surrounding ring features.
The clouds of ejected material were visible because of the angle sunlight was hitting the Saturn system and the position of the spacecraft. The first four images were taken near the time of Saturn equinox, when sunlight strikes the rings at very shallow angles, nearly directly edge-on. During Saturn equinox, which occurs only every 14.5 Earth years, the ejecta clouds were caught in sunlight because they were elevated out of the ring plane. The last image was taken in 2012 at a very high-phase angle, which is the sun-Saturn-spacecraft angle. This geometry enabled Cassini to see the clouds of dust-sized particles in the same way that dust on a surface is easier to see when the viewer is looking toward a light source.

The angle that the clouds are canted gives the time elapsed since the cloud was formed (see PIA14941). The A ring cloud formed 24 hours before its first apparition in the top left box; it formed 48.5 hours before the top middle image. The other three clouds were approximately 13 hours, four hours, and one hour old (respectively) at the times they were seen. See PIA11674 for more information on ring impacts.

The Cassini-Huygens mission is a cooperative project of NASA, the European Space Agency and the Italian Space Agency. The Jet Propulsion Laboratory, a division of the California Institute of Technology in Pasadena, manages the mission for NASA's Science Mission Directorate, Washington, D.C. The Cassini orbiter and its two onboard cameras were designed, developed and assembled at JPL. The imaging operations center is based at the Space Science Institute in Boulder, Colo. Image Credit: NASA/JPL-Caltech/Space Science Institute/Cornell

The rings of Saturn act as very effective detectors of many kinds of surrounding phenomena, including the interior structure of the planet and the orbits of its moons, as results provided by Cassini have already shown.

A good example would be a subtle but extensive corrugation that ripples 12,000 miles (19,000 kilometers) across the innermost rings tells of a very large meteoroid impact in 1983.

These new results imply the current-day impact rates for small particles at Saturn are about the same as those at Earth – two very different neighborhoods in our Solar System, and this is exciting to see, explains Linda Spilker, Cassini project scientist at NASA's Jet Propulsion Laboratory (JPL) in Pasadena, Calif.

Spilker adds that it took Saturn's rings acting like a giant meteoroid detector – 100 times the surface area of the Earth – and Cassini's long-term tour of the Saturn system to address this question.

A special opportunity to observe the debris left by meteoroid impacts presented on the Saturnian equinox in summer 2009.

At that time the very shallow sun angle on the rings made the clouds of debris to look bright against the darkened rings in pictures from Cassini's imaging science subsystem.

We knew these little impacts were constantly occurring, but we didn't know how big or how frequent they might be, and we didn't necessarily expect them to take the form of spectacular shearing clouds, said Matt Tiscareno, lead author of the paper and a Cassini participating scientist at Cornell University in Ithaca, N.Y.

He went on to explain that the sunlight shining edge-on to the rings at the Saturnian equinox acted like an anti-cloaking device, so these usually invisible features became plain to see.

Tiscareno and his colleagues now presume meteoroids of this size probably break up on a first encounter with the rings, producing smaller, slower pieces that then enter Saturn's orbit. When these secondary meteoroid bits impact into the rings they spawn the clouds.

The tiny particles creating these clouds have a range of orbital speeds around Saturn. These clouds they produce are soon pulled into diagonal, extended bright streaks.

According to Jeff Cuzzi, Saturn's rings are unusually bright and clean, leading some to suggest that the rings are actually much younger than Saturn. Cuzzi is a co-author of the paper and a Cassini interdisciplinary scientist specializing in planetary rings and dust at NASA's Ames Research Center in Moffett Field, Calif.

He adds that to assess this dramatic claim, we must know more about the rate at which outside material is bombarding the rings. This latest analysis helps fill in that story with detection of impactors of a size that we weren't previously able to detect directly, concludes Cuzzi.