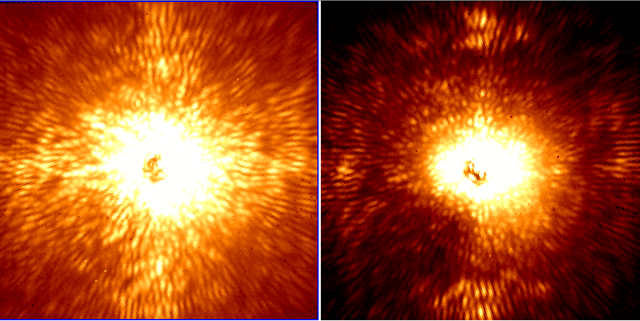 A new advanced telescope imaging system is expected to improve detection of exoplanets obscured by exponentially bright stars. Unlike Kepler mission which uses the transit method to find out exoplanets transiting in front of their stars, this one actually blots out bright light of the star in order to see the planets. It incorporates high-tech instrumentation and software, and is called Project 1640. It will enable astronomers to observe and characterize exo-planetary systems easily and far more efficiently than previously used methods.

The imaging system became first to observe planets at once in a solar system of star HR 8799. HR 8799 is 1.6 times massive and five times brighter than our Sun. The star is located 128 light years away from Earth and had previously been imaged, although the star’s bright light overwhelmed previous attempts to study the planets with spectroscopy. Ben R. Oppenheimer, an astronomer at the American Museum of Natural History and the paper’s lead author said, “These warm, red planets are unlike any other known objects in our universe. All four planets have different spectra and all four are peculiar.” He further explains,

“It’s like taking a single picture of the Empire State Building from an airplane that reveals the height of the building but also a bump on the sidewalk next to it that is as high as a couple of bacteria. Furthermore, we’ve been able to do this over a range of wavelengths in order to make a spectrum.”

Now with this system, the researchers were able to determine the spectra of all four planets surrounding HR 8799, whereby they can assert chemical composition of planet’s atmosphere. Charles Beichman, executive director of the NASA Exoplanet Science Institute at the California Institute of Technology explains,

“In the 19th century it was thought impossible to know the composition of stars, but the invention of astronomical spectroscopy has revealed detailed information about nearby stars and distant galaxies. Now, with Project 1640, we are beginning to turn this tool to the investigation of neighboring exoplanets to learn about the composition, temperature, and other characteristics of their atmospheres.” 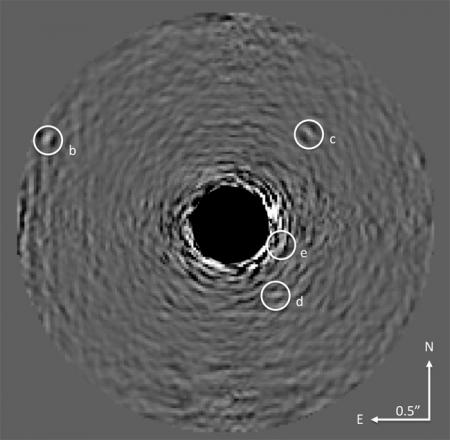 HR8799 is in center covered by black circle and four planets marked as b,c,d and e.
Credit: Project 1640

In order to detect very dim light emitted by exoplanets, four major instruments work collaboratively viz. the world’s most advanced adaptive optics system, which can make millions of tiny adjustments to the device’s two 6-inch mirrors every second; a coronagraph that optically dims the star but not other celestial objects in the field of view; an imaging spectrograph that records 30 images in a rainbow of colors simultaneously; and a specialized wave front sensor that distinguishes between residual starlight that sneaks through the coronagraph and the light from planets, allowing scientists to filter out background starlight more effectively.

Altogether, the project has produced images of celestial objects 1 million to 10 million times fainter than the star at the center of the image, with only an hour of observations. It is also capable of measuring orbital motion of objects. Maria Womack, program director for the Division of Astronomical Sciences at the National Science Foundation said,

“Astronomers are now able to monitor cloudy skies on extrasolar planets, and for the first time, they have made such observations for four planets at once. This new ability enables astronomers to now make comparisons as they track the atmospheres, and maybe even weather patterns, on the planets.” 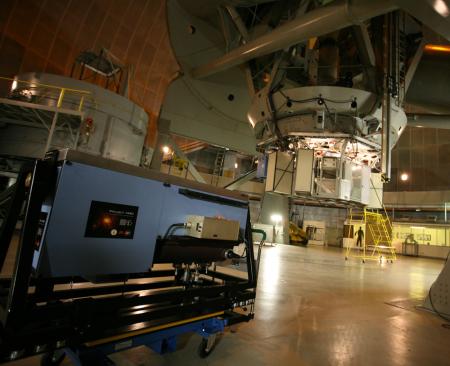 The project 1640 instrument in the telescope dome of the 200-inch Hale Telescope at Caltech’s Palomar observatory.
Credit: Palomar Observatory/S. Kardel

Project 1640 is now operating at Hale telescope at the Palomar Observatory in California and was developed over six years by researchers and engineers at the American Museum of Natural History, the California Institute of Technology, and the Jet Propulsion Laboratory (JPL).

Two images of HD 157728, a nearby star 1.5 times larger than the Sun. The star is centered in both images, and its light has been mostly removed by the adaptive optics system and coronagraph. The remaining starlight leaves a speckled background against which fainter objects cannot be seen. On the left, the image was made without the ultra-precise starlight control that Project 1640 is capable of. On the right, the wavefront sensor was active, and a darker square hole formed in the residual starlight, allowing objects up to 10 million times fainter than the star to be seen. Images were taken on June 14, 2012 with Project 1640 on the Palomar Observatory’s 200-inch Hale telescope. (Courtesy of Project 1640)