Assumption Parish Office of Homeland Security & Emergency Preparedness Director John Boudreau said nearly an acre of land fell off into the west side of the sinkhole. 1 acre = 4 046.86 m2

More debris and hydrocarbon appeared at the surface, Boudreau added.

Assumpton Parish Blog reported yesterday that the Office of Conservation is advising the public that a large “burp” event is related to the recent period of elevated deep seismic activity around the failed Oxy 3 cavern and the sinkhole.

Though the deep subsurface activity appears to have calmed significantly, Conservation’s contracted experts continue to note shallower seismic activity likely related to slumping of the sinkhole sides and water movement in the sinkhole and immediately below it.

Monitoring is constantly ongoing in the area and Conservation will advise the public of significant changes in subsurface conditions. 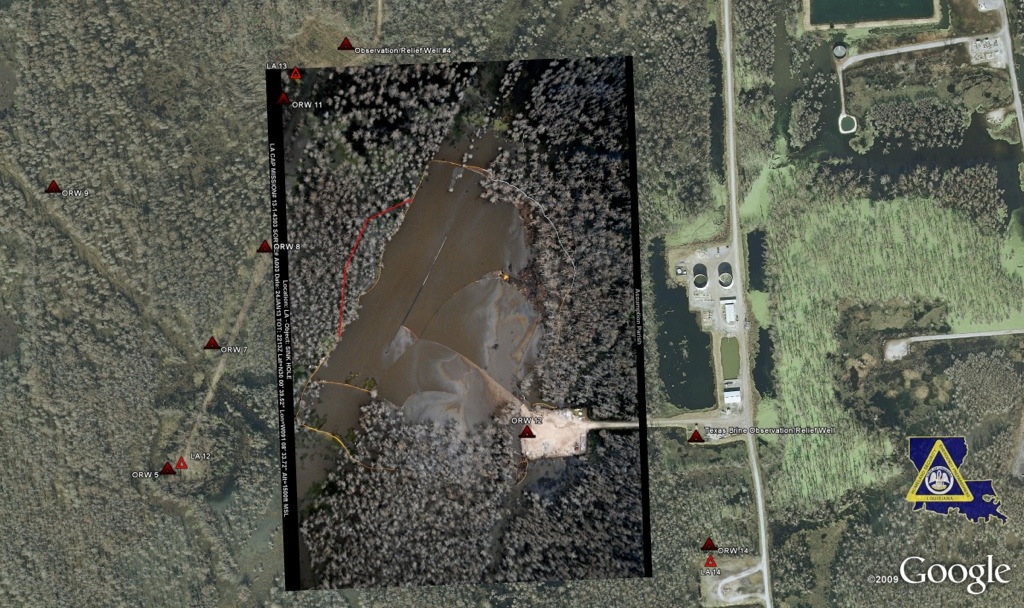 The red line in the photo attached depicts the area of swampland that sloughed in when the “burp” in the sinkhole happened on March 17, 2013.

Early in the morning on Friday, August 3, 2012, Assumption Parish Office of Homeland Security & Emergency Preparedness Director John Boudreaux was notified by local industry that a sinkhole had formed overnight in the swamp in the area. The hole was discovered after a strong diesel smell was experienced in the proximity of the sinkhole. On that same day, parish officials called for a mandatory evacuation of residents in the community and parish officials requested the assistance of state agencies in the activities involved in this emergency.

Featured image: The red line in the photo attached depicts the area of swampland that sloughed in when the “burp” in the sinkhole happened on March 17, 2013. (http://assumptionla.wordpress.com/2013/03/17/520-p-m-slough-in-image/)