Water levels are tracked by gauges placed around Lake Michigan and Lake Huron, which are technically considered one body of water connected by the Straits of Mackinac. Daily measurements are then averaged at the end of each month for record-keeping purposes. 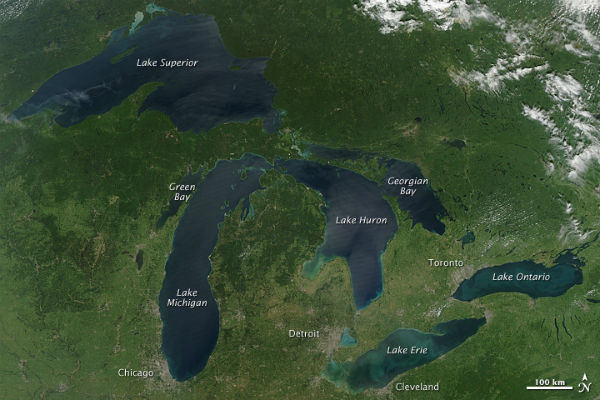 The experts said the new low-water mark means the lakes are headed into “uncharted territory”. The lakes are now lower than they have ever been for any month since modern record-keeping began. According to a retired Army Corps hydrologist Roger Gauthier, it would take years of consistent rain to naturally improve the situation.

The U.S. Army Corps of Engineers reported that in January the Lake Michigan plunged below its previous record low-level, set in March 1964. The water is now more than 2 meters (6 feet) below the record high, set in October 1986.

“At these numbers, it would take years of consistent rain to naturally improve the situation. Water levels can be restored responsibly by gradually installing sills at the head of the St. Clair River. . . . It’s time for governments to work to finish the job, before we have further disasters.”  Roger Gauthier, a retired Army Corps hydrologist

Humans also have played a role by dredging the St. Clair River, which is the main outflow for the lakes. Deepening the river’s channel to open the door for oceangoing freighters has increased the amount of water that can flow out of Michigan and Huron, into Lake Erie, over Niagara Falls and, eventually, out to the Atlantic Ocean. Dredging and riverbed mining in the St. Clair dropped the long-term average of the lakes by about 40 cm (16 inches). Great Lakes water-level study recently completed by the U.S. and Canadian governments revealed that unexpected erosion since the last major St. Clair dredging project in the early 1960s dropped the lakes’ long-term average by an additional 7- 13 cm (3 to 5 inches). That means the lakes today are nearly 60 cm (2 feet) lower than they would be if there were no human activity around St. Clair’s riverbed. 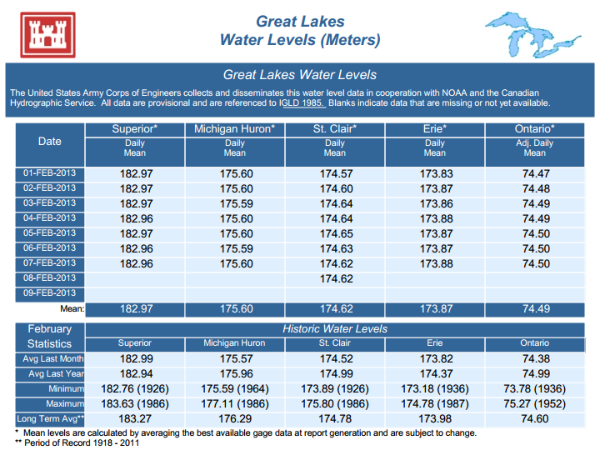 And another problems for which are humans responsible are  industrial and agricultural pollutants, sewage discharges, shoreline development, overfishing and a swelling number of invasive species.

A lake of any size is a dynamic system, subject to constant change. Sometimes slightly more water comes in than goes out, or vice versa, and the lake level changes in response. The Great Lakes are no different, only much more complex. Some of the factors affecting lake levels are evaporation, precipitation, crustal rebound, wind, dredging, diversion, flood control and power generation.

Lower water levels will exert some of the most significant impacts on terrestrial and aquatic coastal ecosystems. Reduced water levels will modify or eliminate wetlands that function to maintain shoreline integrity, and therefore, reduce erosion, filter contaminants, absorb excess storm water, and provide fish and wildlife habitat, because coastal wetlands function as important staging, breeding, and wintering habitat for waterfowl and breeding and nursery areas for many fish. Lake level effects are the most important natural cause in determining the expansion and contraction of wetland classes. These fluctuations would “change the position of the water line along the shore and therefore change the shape of the zone that wetland vegetation would inhabit”. Further, although some wetlands that directly border the Great Lakes shores might be able to shift toward the low water levels, some enclosed wetlands would eventually dry up and transform into another ecosystem over time.

Sources: JSOnline, University of Michigan, US Army Corps of Engineers