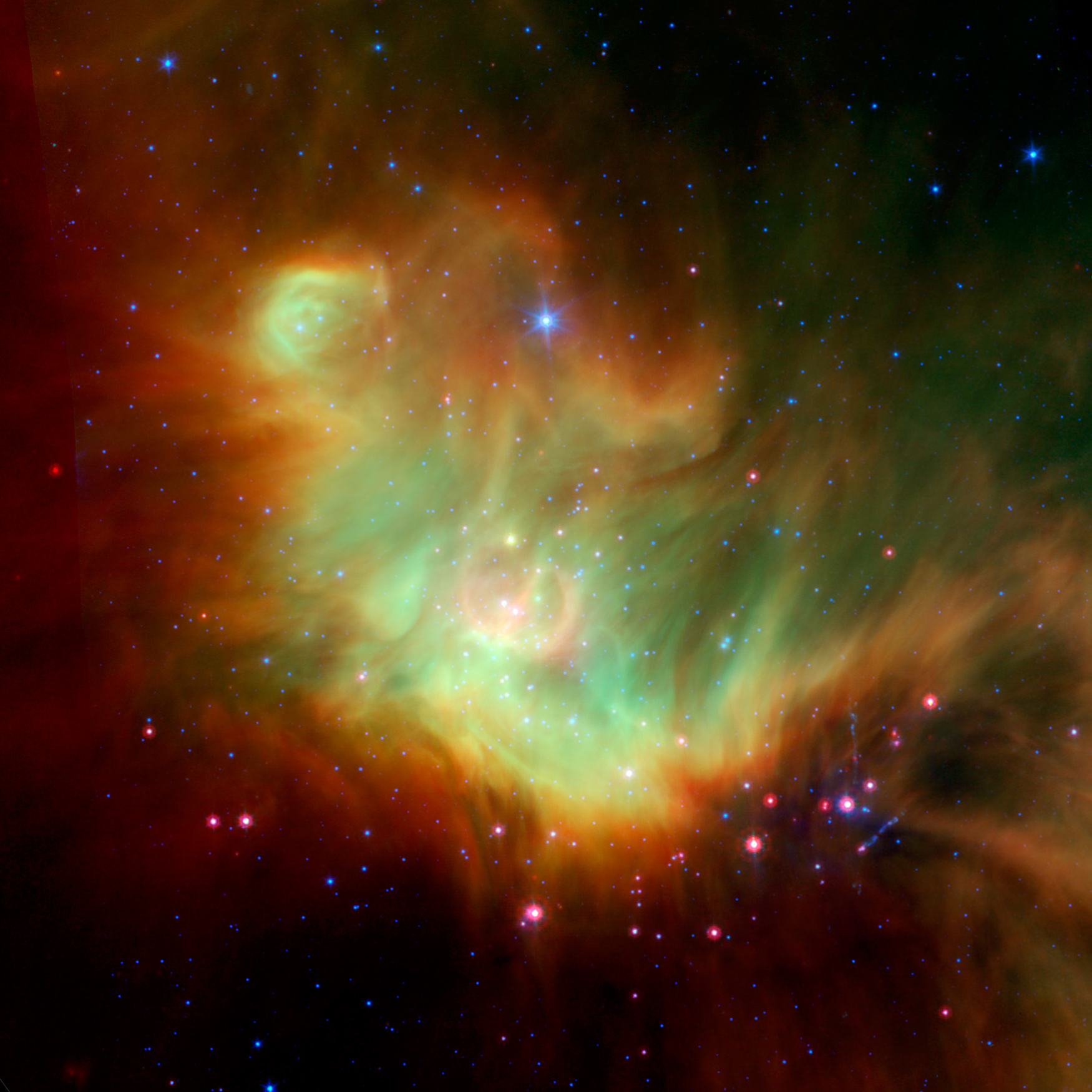 NASA’s Spitzer space telescope observed a rare phenomenon – an infant binary star behind a dense disk and envelope of dust 950 light-years away from Earth flashes at regular intervals. NASA report published on February 7, 2013 says such phenomenon has been observed before, but they noticed this burst of light every 25.34 days and is the most powerful beacon seen to date; making it different from previously observed infant protostars. Dubbed LRLL 54361, this protostar (early stage of a growing star) offers insights into the early stages of star formation when lots of gas and dust is being rapidly accumulated, to form a new binary star. NASA’s Hubble Space Telescope was used to validate Spitzer telescope’s findings and reveal detailed structure of LRLL 54361.

The following video, created from a sequence of images from the Hubble Space Telescope, shows a pulse of light emanating from the protostellar object LRLL 54361. An apparent edge-on disk, visible at the center of the object and three separate structures are interpreted as outflow cavities.


According to astronomers, the light flashes are caused by periodic interactions between two newly formed stars that are binary, or bound to each other by gravitation. A blast of radiation is unleashed each time the stars get close to each other in their orbits. This phenomenon, called pulsed accretion, has been seen in later stages of star birth, but never in such a young system or with such intensity and regularity. James Muzerolle of the Space Telescope Science Institute in Baltimore, Md. said, “This protostar has such large brightness variations with a precise period that it is very difficult to explain.” 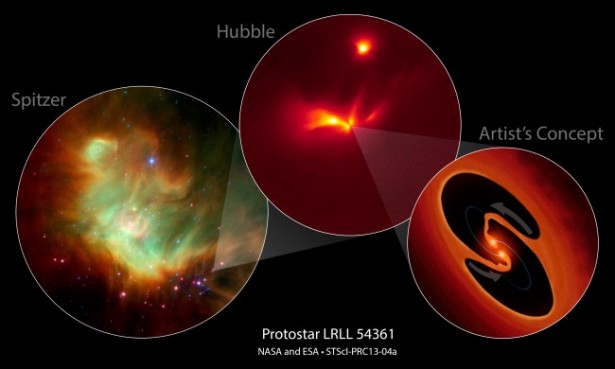 Left: This is a false-color, infrared-light Spitzer image of LRLL 54361 inside the star-forming region IC 348 located 950 light-years away and has an unusual variable object that has the typical signature of a protostar. Center: This Hubble Space Telescope monochromatic-color image resolves the detailed structure around the protostar, consisting of two cavities that are traced by light scattered off their edges above and below a dusty disk. Right: This is an artist’s impression of the hypothesized central object that may be two young binary stars.. (Credit: NASA, ESA, J. Muzerolle, E. Furlan, K. Flaherty, Z. Balog, and R. Gutermuth)

LRLL 54361 is a variable object inside the star-forming region IC 348, located 950 light-years from Earth. Data from Spitzer revealed the presence of protostars. Statistical analysis suggests the two stars are estimated to be no more than a few hundred thousand years old. The Spitzer infrared data, collected repeatedly during a period of seven years, showed unusual outbursts in the brightness of the suspected binary protostar. Astronomers used NASA’s Hubble Space Telescope to confirm the Spitzer observations and reveal the detailed stellar structure around LRLL 54361. Hubble observed two cavities above and below a dusty disk. The cavities are visible by tracing light scattered off their edges. They likely were blown out of the surrounding natal envelope of dust and gas by an outflow launched near the central stars.

The disk and the envelope prevent the suspected binary star pair from being observed directly. By capturing multiple images over the course of one pulse event, the Hubble observations uncovered a spectacular movement of light away from the center of the system, an optical illusion known as a light echo.

Muzerolle and his team hypothesized the pair of stars in the center of the dust cloud move around each other in a very eccentric orbit. As the stars approach each other, dust and gas are dragged from the inner edge of a surrounding disk. The material ultimately crashes onto one or both stars, which triggers a flash of light that illuminates the circumstellar dust. The system is rare because close binaries account for only a few percent of our galaxy’s stellar population. This is likely a brief, transitory phase in the birth of a star system.

Muzerolle’s team next plans to continue monitoring LRLL 54361 using other facilities including the European Space Agency’s Herschel Space Telescope. The team hopes to eventually obtain more direct measurements of the binary star and its orbit. The paper on these findings was recently published in the science journal Nature.

Featured image: A false-color, infrared-light Spitzer image of LRLL 54361 inside the star-forming region IC 348 located 950 light-years away and has an unusual variable object that has the typical signature of a protostar. (Credit: NASA, ESA, J. Muzerolle, E. Furlan, K. Flaherty, Z. Balog, and R. Gutermuth)