Researchers claim that a meteorite which disintegrated and fell in Sri Lanka in December last year bears evidence of extra-terrestrial life. A joint research by scientists from UK and Sri Lanka led to discovery of fossilized algae in samples of a large meteorite, collected immediately after it disintegrated and fell in the village of Araganwila in Sri Lanka on 29 December 2012. They have concluded that data on “fossil” diatoms provide strong evidence to support the theory of cometary panspermia - which proposes that life forms that can survive the effects of space, such as extremophiles, become trapped in debris that is ejected into space after collisions between planets that harbor life and Small Solar System Bodies. Detailed article named Fossil Diatoms in a New Carbonaceous Meteorite about the findings was recently published in the Journal of Cosmology. 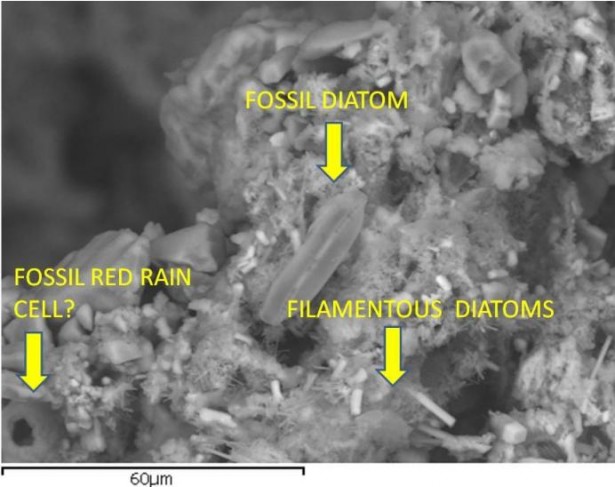 Research paper claims that in above image "we can unambiguously identify an object as being a diatom from its complex and highly ordered microstructure and morphology, a structure that cannot result from any conceivable mineralisation or crystallisation process. The mineralised fossil structure of the original diatom has been preserved intact and displays close similarities in elemental abundances with the surrounding material." A comparison between SEM images of  another fossil diatom in the Polonnaruwa meteorite with a modern diatom Sellaphora blackfordensis further strengthens their argument. Following image depicts the comparison: 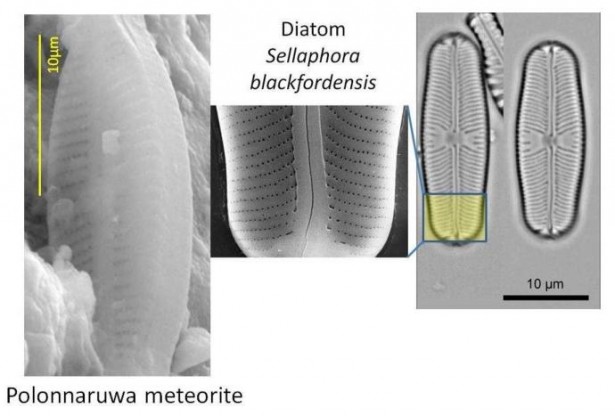 Comparison of a Polonnaruwa meteorite structure with a well-known terrestrial diatom. Credits: www.journalofcosmology.com

Furthermore, researchers say contamination of samples is not possible because the structure in the meteorite is deemed to be a fossilised object and there were no fossils diatoms present near the surface of the Earth to contaminate a new fall of meteorites. Though there may still be skeptics, they conclude that identification of fossilised diatoms in the Polonnaruwa meteorite is firmly established and unimpeachable; thereby vindicating the theory of cometary panspermia.

Newly published evidence reveals that Earth's hidden continent Zealandia-- which stretches across 5 million km2 (2 million mi2) beneath the southwest Pacific Ocean-- was shaped by two tectonic events. First, it was ripped away from Australia and Antarctica and...

A team of Japanese researchers-- using data from the Atacama Large Millimeter/submillimeter Array (ALMA)-- discovered that galactic cosmic rays affect the chemical reactions involved in the formation of organic molecules bearing nitrogen on the atmosphere of...

Scientists were able to get two quantum memories entangled over 50 km (31 miles) of fiber optic cables-- over 40 times the past record-- bringing the idea of faster and super-secure quantum internet more possible. Quantum communication depends on quantum...

The European Southern Observatory's (ESO) Very Large Telescope (VLT) has captured the unusual dimming of Betelgeuse, a red supergiant star in Orion constellation. The images of the star's surface not only show it losing luminosity but also its shape...

Specialists from the World Health Organization (WHO) have started meetings with their Chinese counterparts on dealing with the coronavirus disease-- now officially called COVID-19-- which has so far officially killed 1 776 people. The number of infected with the...

A very bright fireball described to be green in color was seen streaking through the sky over Malaysia and Singapore on February 11, 2020. According to the American Meteor Society (AMS), the meteor was spotted around 05:01 LT on February 12 (February 11 at 21:01...

A series of small explosions and tremor bursts have been detected in seismic data at Semisopochnoi over the past 7 hours and are continuing, representing a significant uptick in activity, the Alaska Volcano Observatory (AVO) reported at 09:19 UTC on February 15,...

The hunger and malnutrition crisis in sub-Saharan Africa is increasing at an alarming rate, with now about 239 million people suffering, according to the United Nations Food and Agriculture Organization (FAO). The organization discussed key targets to combat the...

The arctic sea ice has reached its largest early February ice extent in 11 years, surpassing the average size from 2001 to 2010. The recovery is a result of a strong polar vortex. Sea ice analysis indicated that during this rather mild winter in the middle...

Tropical Cyclone "Francisco" re-formed in the Indian Ocean, east of Madagascar, on February 13, 2020, after weakening below tropical cyclone status on February 6. Francisco made landfall at 18:00 UTC on February 14 over the southeast coast of the...

Temperatures in Saudi Arabia dropped below freezing level this week as the worst cold wave since 2016 persists in parts of the country. The capital city of Riyadh recorded frigid temperatures, leaving the streets almost empty on Tuesday and Wednesday, February 11...

A series of avalanches killed at least 21 people in Afghanistan's Daykundi province, authorities confirmed on Friday, February 14, 2020. The death toll is feared to climb as severe weather conditions hamper rescue efforts. Ahmad Tameem Azimi, a spokesman of the...

A powerful North Atlantic cyclone forced the Icelandic Met Office (IMO) to issue a red weather alert for southern Iceland, in effect through the first half on February 14, 2020. Violent and dangerous wind gusts may exceed 200 km/h (124 mph) in some areas. Residents...

A severe hailstorm hit multiple cities in South China's Guangdong province on Thursday, February 13, 2020. Among the places hit by hail were Zhanjiang, Maoming, and Zhuhai where temperatures, in particular, were warm at 21 °C (69.8 °F). Photos and videos...