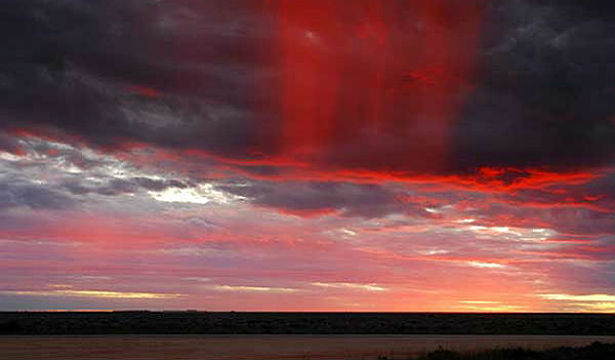 Residents of Sevenagala and Indikolapelessa in the Moneragala District, area in the southeastern parts of the island, witnessed an unusual phenomenon on November 14/15, 2012. Rare showers of red rain fell for over 15 minutes in Sewanagala, Monaragala and Manampitiya and Polonnaruwa.

Initial report from a senior official from the Department of Meteorology said the red rain was not a natural phenomena and the reason could be some chemicals that had been released from the factories, getting mixed with the clouds. South bound winds could possibly carry pollen grains or spores to Sri Lanka from South India, but the wind was flowing in a different direction.

Furthermore, attributing the color to chemical pollution would not be a satisfactory explanation, as Sri Lanka does not have much in the way of chemical factories according to Sri Lanka Department of Meteorology. It was possible to experience a similar phenomenon when a tornado passes low over a waterfall, taking up soil particles, which would later fall with the rain.

Some of the usual reasons for red rain are increase in the acidity of the air and sand material from dust storms. However, there are no sand storms in Sri Lanka. India had red rain last year in Kerala and most recently in June 2012, and Indian scientists discovered a variety of micro organisms as a reason for the red rains. Since the micro organisms had no DNA, they guessed it had to be a strange phenomenon.

Most commonly found within soil, the bacteria are said to diverse between red and green colors. Experiments carried out at the Sri Lanka Institute of Nanotechnology (SLIN) proved conclusively that the cause for the unusual colour of the rain was the presence of a unicellular micro-organism belonging to Kingdom Protista, of the Phylum Euglenozoa, known as Trachelomonas. Trachelomonas was the main cause of reddish downpours in other regions of the world as well.

“The testing, which has been done confirms the presence of living organisms in the water. It was observed that these organisms stopped all movement when exposed to light.” media spokesman for the Ministry of Health (MoH) W.M.D. Wanninayaka

An outer shell-like covering known as a Lorica is possessed by this organism, which can have a colour ranging from yellow to reddish-brown, depending on the concentration of the iron salts found within it.  The Medical Research Institute (MRI) said there was no health hazard for people from the red rain experienced in Manampitiya, Sevanagala and Indikolapelessa. 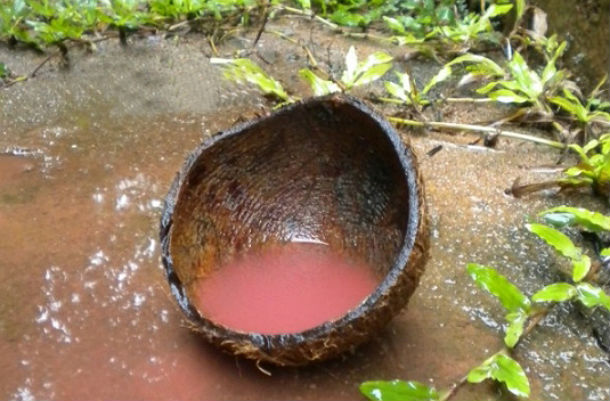 According to Ministry of Health, the local phenomenon had no relationship whatsoever to the ‘red rain’ of Kerala which was very thick, almost blood like. The local red rain does not bear any resemblance to it in texture. Professor Chandra Wickramasinghe, Director of the Astrobiological Center at the Buckingham University, England said the recent phenomenon of red rain in Sri Lanka is reportedly similar to the red rain in Kerala in 2011 and 2009 which definitely had some cosmic connection. Director General of the , S.H. Kariyawasam, also said the ‘red rain’ witnessed in Sri Lanka most probably did not have the same origin as the Kerala rains, as the current direction of wind flow was towards the west.

During testing of the ’red rain’ of Kerala, microscopic, spherical, cellular structures were noticed in the water, which were apparently lacking in DNA, a fact which has baffled scientists. This lack of DNA lead to the ‘extraterrestrial origin’ theory, formulated by scientists Godfrey Louis and Santhosh Kumar, but no conclusive proof regarding their hypotheses have been obtained.

“We are not going to lean towards an ‘extraterrestrial origin’ theory regarding this rain. Additional tests of a biochemical nature are being done, and we hope to learn more from these tests.” media spokesman for the Ministry of Health (MoH) W.M.D. Wanninayaka

Incidents where water bodies all over the world have been turning red have been reported for some time now. While most of these occurrences, including the ‘red rain’ of Sri Lanka, have been given sufficient explanations by scientists, some isolated incidents remain a mystery. The DNA-less structures observed by them had allegedly displayed a number of remarkable characteristics, atypical of those displayed by any known micro-organisms. These properties had included the ability to replicate and multiply at extreme temperatures of up to 300 degrees Celsius, and the ability to be cultured in unconventional substrate materials.

“As far as the Kerala red rain is concerned, there is a mysterious microorganism that has defied identification so far. We have not been able to convincingly extract any DNA from them and Prof Louis has maintained that there is no DNA, but it can multiply at very high temperatures under high pressure conditions. I think there are all the signs of an alien bug! The Kerala red rain was preceded by a sonic boom that was heard, probably indicating that a fragment of a comet exploded in the atmosphere and unleashed the red cells that became incorporated in rain. I suspect the same could be true of the Sri Lankan rain, but I would like to have samples to confirm this. I should also say that reports of red rain are found throughout history all the way back to biblical times. I think this could be more evidence for cometary panspermia theory.” Professor Chandra Wickramasinghe, Director of the Astrobiological Center at the Buckingham University