Volcanic tremor has eased but remains elevated at San Cristobal volcano in Nicaragua. Over 15 explosions were recorded at the volcano on December 26, 2012. Ash columns reached up to 500 meters high, slightly affecting surrounding towns of Tonala, Morazán, Puerto Corinto and Chichigalpa.

A Yellow alert was issued for the Department of Chinandega. Officials began the precautionary evacuation of some 300 families in the province of Chinandega (northwest) after new ash emissions started at San Cristóbal volcano, following an impressive increase in seismic activity.

Some 1 500 farmers living on the slopes of the San Cristobal volcano refused to leave, despite being ordered to evacuate as the volcano spewed gas, sand and ash.

Many locations around the volcano have layers of ash in the streets and people are wearing masks.

Traffic in Chinandega and El Viejo was regulated by police because of the poor visibility. 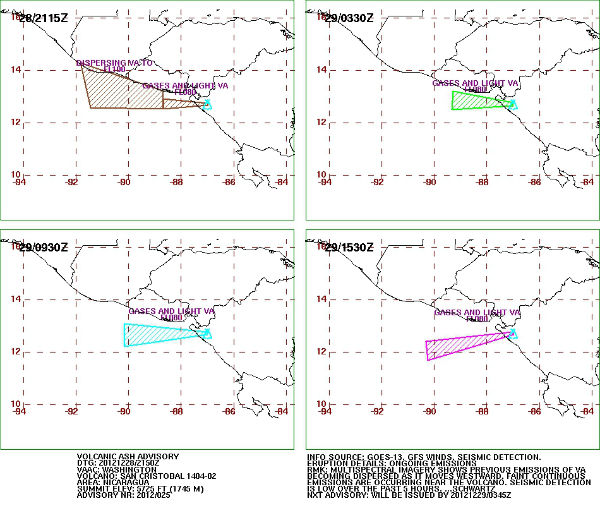 Historical eruptions from San Cristóbal, consisting of small-to-moderate explosive activity, have been reported since the 16th century. Some other 16th-century eruptions attributed to Casita volcano are uncertain and may pertain to other Maribios Range volcanoes.