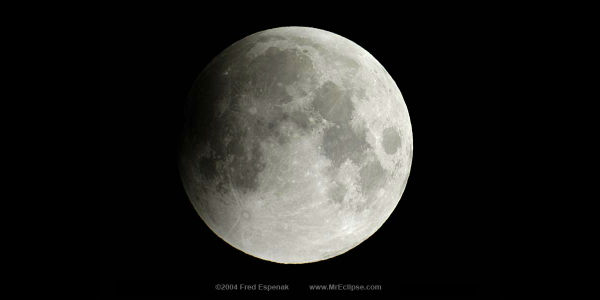 On November 28, 2012 the moon will slide through the Earth’s pale outer shadow or penumbra, resulting in a penumbral lunar eclipse. A penumbral lunar eclipse occurs when the Earth moves between the Sun and Moon but the three celestial bodies do not form a perfectly straight line. The Earth revolves around the Sun and the Moon circles the Earth. During Full Moon, the Earth passes roughly between Moon and Sun.


First penumbra contact will occur at 12:15 UTC (7:15 a.m. EST). A weak penumbral eclipse of the Moon occurs before and/or during dawn Wednesday morning for western North America. You should look for a weak shading on the Moon’s north or upper right side. The farther in from the West Coast you are, the brighter the dawn and the lower the Moon will be. The penumbral eclipse takes place high in the middle of the night for the longitudes of Australia and Japan, in late evening of the 28th local date for China and Southeast Asia, and early that evening for India with the Moon still low in the east. 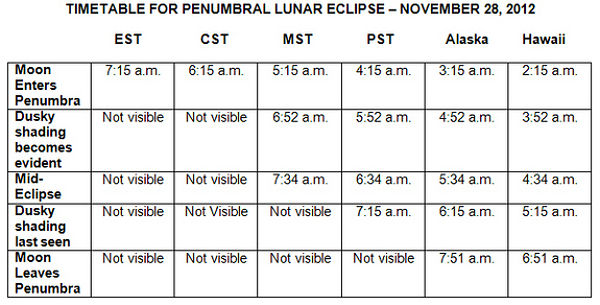 How to Photograph the Lunar Eclipse

The moon will be full and at its apogee at the time of eclipse. Apogee is farthest point in its orbit from Earth. The moon will be positioned 6 degrees northwest of Aldebaran and about 8 degrees west of Jupiter, located in the constellation Taurus. You can spot dimmer Pleiades above them.

The November 28 penumbral lunar eclipse is the 11th member of Saros 145, a series of 71 eclipses in the following sequence: 18 penumbral, 10 partial, 15 total, 20 partial, and 8 penumbral lunar eclipses. Lunar eclipses of Saros 145 all occur at the Moon’s descending node and the Moon moves northward with each eclipse. The series began with a penumbral eclipse near the southern edge of the penumbra on August 11, 1832. The series will end with a penumbral eclipse near the northern edge of the penumbra on September 16, 3094. The total duration of Saros series 145 is 1262.11 years.