A partial lunar eclipse, visible from the Americas, northern Europe, eastern Asia, Australia and the Pacific, will take place on Friday, November 19, 2021. The eclipse is followed by a total solar eclipse on December 4, 2021.

The partial eclipse phase will last 3 hours, 28 minutes and 24 seconds, and the full eclipse 6 hours and 1 minute, making it the longest partial lunar eclipse since 1440 and until 2699.

The Moon will begin to enter the Earth's penumbra at 06:02 UTC and the instant of greatest eclipse will take place at 09:02 UTC, 1.7 days before the Moon reaches apogee.1

During this eclipse, the Moon is in the constellation Taurus.

The synodic month in which the eclipse takes place has a Brown Lunation Number of 1223.

The eclipse belongs to Saros 126 and is number 45 of 70 eclipses in the series. All eclipses in this series occur at the Moon’s ascending node.

It is followed two weeks later by a total solar eclipse of December 4, 2021.

These eclipses all take place during a single eclipse season. 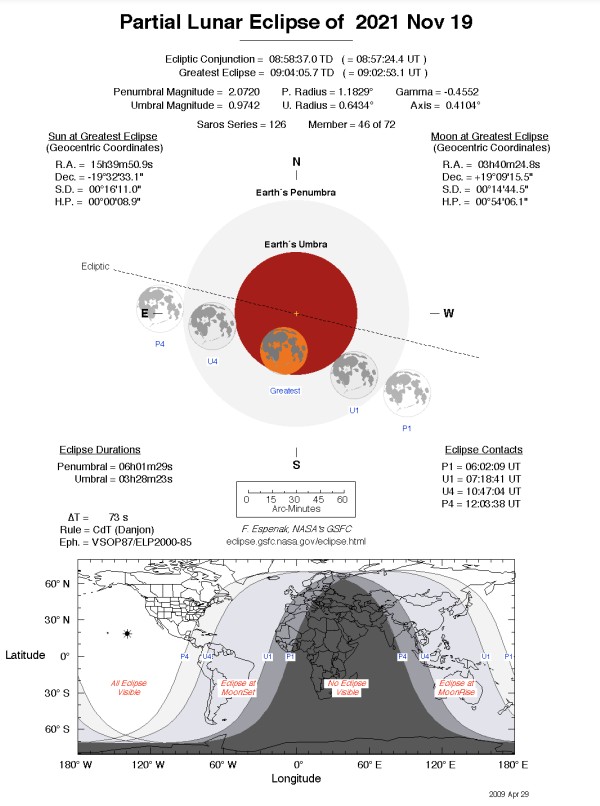 If you are so inclined, take a look at some astonishing predictions for November 2021 by famous Vedic Astrologer Joni Patry.

"November is the month you're going to see the direction it's all going in as we approach the eclipse season," Patry said.

"The eclipse of November 19 is 3 degrees of Taurus which is extraordinarily meaningful. But then again, two weeks following December 4 we're gonna have the solar eclipse and this is going to bring to light something that will be very surprising… I might say shocking to the world."

"So watch how this all unfolds."