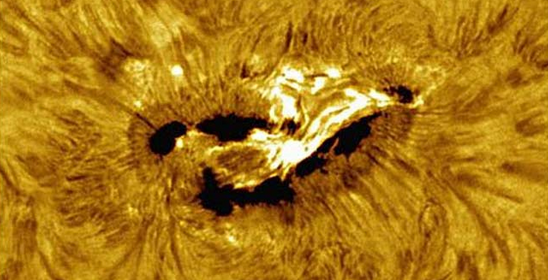 In January 2005, some remarkable things happened on the Sun, and the implications are still reverberating through the scientific community. Between January 15th and 19th four powerful solar flares erupted from “sunspot 720”, shown in the picture above. Then on January 20 the fifth explosion produced a coronal mass ejection (CME) that achieved velocities incomparably greater than anything astronomers had seen before. While it often takes more than 24 hours for the charged particles of a solar outburst to reach the Earth, this one was a profound exception. Just thirty minutes after the explosion, Earth (some 96 million miles from the Sun) was immersed in what NASA scientists called “the most intense proton storm in decades”. Proton storms get their name from the “rain” of positively charged particles when a mass ejection reaches the Earth.

One reason proton storms get attention is that they interfere with satellite communications and can even penetrate the skin of space suits and make astronauts sick. But for the proponents of popular theories about the Sun, this “storm” was far more than an irritant. According to a NASA news release, the event “has shaken the foundations of space weather theory”.

Prior to this event, how did astronomers explain proton storms? NASA’s “Headline News” story tells us that the mass ejection “begins with an explosion, usually above a sunspot. Sunspots are places where strong magnetic fields poke through the surface of the Sun. For reasons no one completely understands, these fields can become unstable and explode, unleashing as much energy as 10 billion hydrogen bombs”.

Powerful ejections can throw off a billion tons of solar material against the enormous gravitational tug of the Sun. Normally the ejections travel relatively slowly. “Even the fastest ones, traveling one to two thousand km/s, take a day or so to reach Earth. You know a CME has just arrived when you see auroras in the sky”.

But how does the ejected material attain its observed speeds? Even common ejections travel faster and faster as they move outward from the Sun, achieving speeds up to a thousand miles per second or more. This acceleration, some solar theorist surmise, can be explained by the “shock waves” that the CME produces. “Shock waves in front of the CME can accelerate these protons in our direction”hence the proton storm”.

But this space weather theory is “soon to be revised”, the story says. Here’s why: Though the speeds of typical CME’s are impressive, and have posed a deep mystery for decades, they do not come close to the speed of the January 20 ejection. Light from the Sun (or from a solar flare) reaches Earth in 8 minutes. An ejection reaching Earth in 30 minutes must be rapidly accelerated to velocities more than a quarter of the speed of light. From the traditional viewpoint, this is unthinkable. And yet it happened.

How, then, do theorists of the Electric Universe see all of this? Most are amused by the commotion. In the universe now observed with better and more versatile instruments, we see plasma jets and ejected material often attaining velocities approaching the speed of light. In electrical terms, the explanation is direct and obvious: electric fields in space accelerate charged particles. On this electrical principle there is no debate. But by banishing electric fields from their theoretical models, astronomers and astrophysicists are left with no mechanism to account for the things they now see. One after another, the ad hoc guesses must be abandoned.

The electrical theorists accept the observed facts concerning CME’s, but they consider the astronomer’s theoretical framework to be a decades-long disaster. It is neither sufficient nor accurate to describe sunspots as “places where strong magnetic fields poke through the surface of the Sun”. Such a claim fails to account for the magnetic fields themselves and leaves the associated sunspot events unexplained. When the NASA story says that the magnetic fields “become unstable and explode, unleashing as much energy as 10 billion hydrogen bombs”, it adds that “no one completely understands” how this occurs.

The authors of the news release are clearly not familiar with electrical discharge in plasma, a phenomenon outlined in great detail by Nobel Laureate Hannes Alfven, the founder of plasma cosmology. Alfven’s contributions were rooted in direct observation of plasma discharge in the laboratory. He described how the insulating layers of the cellular structures that form in electrified plasma often break down, causing instabilities. Such instabilities are typified by the energetic explosions we see above sunspots.

But even when the implications are obvious to the electrical theorists, they seem to elude solar physicists. Reflecting on the January 20 outburst, astrophysicist Robert Lin of UC Berkeley affirmed that, “We have an important clue”. He noted that when the explosion occurred, sunspot 720 was located at a special place on the Sun: 60 degrees west longitude. This is significant, he said, because from this location “the sunspot was magnetically connected to Earth”. By this he meant that the lines of force of the Sun’s magnetic field, followed outward from that point along their spiraling path, lead directly to the Earth. The NASA headline article called this “a superhighway for protons leading all the way from sunspot 720 to our planet”.

Though the article accurately describes the “highway” taken by the charged particles, it concludes, “How they were accelerated, however, remains a mystery”. It’s a mystery only to them. Neither Lin nor the article’s author is familiar with the “field aligned currents” documented by Alfvén. By following the direction of the induced magnetic fields, electric currents move efficiently, like transmission lines, across the vast distances of interplanetary, interstellar, and intergalactic space.

The quarter-light-speed CME of January 20 is not just an isolated exception to the “normal” solar wind. It demonstrates that the “normal” explanation for the solar wind is mistaken and unable to account for the extremes of solar wind behavior. (On some occasions, the wind had stopped–an event just as unexplainable by standard theory as the January 20 event.) The electrical acceleration of plasma accounts for the entire range of wind behavior.

For an overview of the electric sun hypothesis see: thunderbolts.info…

For a review of the dilemma facing popular sunspot theory see: thunderbolts.info…

For a brief discussion of the most common error made in assessing the electric sun hypothesis, see: thunderbolts.info…

(Thanks to Michael Armstrong for much of the factual content in this article.)