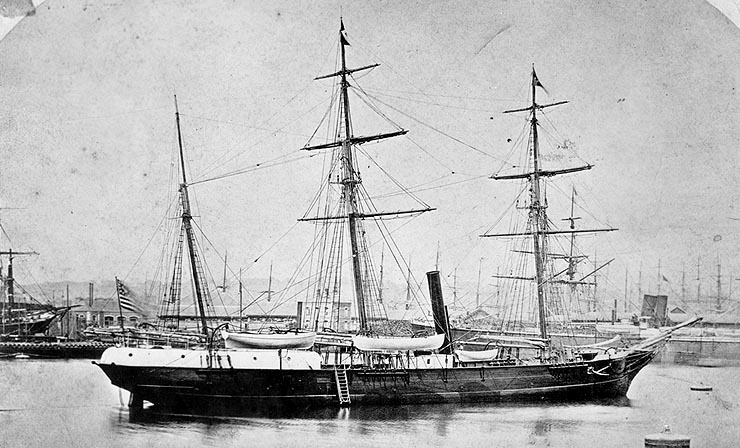 Before there were satellites or weather data transmitters or computer databases, there were Arctic sea voyages and sailors dutifully recording weather observations in ship logs. Now a new crowdsourcing effort could soon make a wealth of weather data from these ship logs available to climate scientists worldwide.

NOAA, National Archives and Records Administration, Zooniverse — a citizen science web portal — and other partners are seeking volunteers to transcribe a newly digitized set of ship logs dating to 1850. The ship logs, preserved by NARA, are from U.S. Navy, Coast Guard and Revenue Cutter voyages in the Arctic between 1850 and the World War II era.

“We hope to unlock millions of weather, sea ice and other environmental observations which are recorded in these documents,” said NOAA Administrator Jane Lubchenco, Ph.D. “These observations represent one of the largest and most underutilized collections of meteorological and marine environmental data in existence. Once converted into digital formats, new analyses of these data will help provide new insights.”

Organizers hope to enlist thousands of volunteers to transcribe scanned copies of logbook pages via the Old Weather project – www.oldweather.org. The principal aim of the project is to improve understanding of global climate, but the information recorded in these logbooks will also appeal to a wide array of scientists from other fields – historians of many specialties, genealogists, as well as current members and veterans of the U.S. Navy and Coast Guard.

“We are delighted to be working with NOAA and Zooniverse so that our historical records can enable scientific discovery in the 21st century,” said David S. Ferriero, the Archivist of the United States. “While the data extracted from these records will be useful to scientists, these documents are also a treasure-trove of information for historians, genealogists, and others interested in the experiences and accomplishments of seafaring people.”

The Old Weather collaboration will provide free online access to primary documents, new data resources, and analysis tools. Old Weather is one of a suite of projects produced, maintained and developed by the Citizen Science Alliance and accessible online through Zooniverse. Citizen Science Alliance member institutions work with academic and other partners around the world to produce projects that use the efforts and ability of volunteers to help scientists and researchers deal with the flood of data that confronts them, explained Philip Brohan, UK Met Office climate scientist and leader of the Old Weather project.

The National Archives will host digital images from all the logbooks in this collaboration on its website. This three-way collaboration not only makes the logbooks available to Old Weather citizen scientists and NOAA researchers, but also to anyone with Internet access who wishes to explore the diplomatic, scientific, technological and military aspects of the voyages, as well as accounts of dramatic rescues and tragic losses. “The logbooks not only capture operations of U.S. government ships,” said Ferriero, “They are an important cornerstone to researching U.S. and global history of any type.”

The Old Weather project began in 2010. Since then, 16,400 volunteers have transcribed 1.6 million weather observations from British Royal Navy logbooks – work that would have taken one person many years to complete. Now, Old Weather is taking on the National Archives’ extensive collection of logbooks, with an initial focus on ships that operated in the Arctic. Old Weather-Arctic will start off with roughly 100,000 logbook pages that include an estimated one million new-to-science observations.

Participants in Old Weather-Arctic will be able to work with the logbooks of the doomed 1879 USS Jeannette Arctic expedition, the Revenue Cutter Thomas Corwin that carried the famous naturalist John Muir to the far North in 1881, and the Coast Guard cutter Bear that sailed the coasts of Alaska for nearly 50 years. Many other ships, whose logs will be added in coming months, engaged in a variety of both unusual and useful work-a-day tasks in the Arctic.

For years, scientists at the NOAA Pacific Marine Environmental Laboratory (PMEL) in Seattle have been studying the Arctic climate and working to establish historical Arctic climate baseline data. However, much of the older data exist only in hand-written documents inaccessible to most scientists. Last year, researchers at PMEL and the Joint Institute for the Study of the Atmosphere and Ocean, a partnership between NOAA and the University of Washington, approached the National Archives about digitizing its unique collection ship logbooks.

With funding from the North Pacific Research Board and the National Science Foundation, Old Weather-Arctic began taking shape. For several months, a small team of specially trained student interns worked with Archives’ staff to photograph the old ship logbooks, page-by-page, at a dedicated NOAA imaging station at National Archives facilities in Washington, D.C. and College Park, Md. Zooniverse has uploaded the ship log images to the Old Weather website, where volunteers can now transcribe the weather observations and any other interesting reports they might find.

Project scientists will integrate the transcribed data produced by Old Weather volunteers into existing large-scale data sets, such as the International Comprehensive Ocean Atmosphere Data Set, which are used by researchers around the world.

NOAA’s mission is to understand and predict changes in the Earth’s environment, from the depths of the ocean to the surface of the sun, and to conserve and manage our coastal and marine resources. Visit us atwww.noaa.gov and join us on Facebook, Twitter and our other social media channels.

The National Archives and Records Administration is an independent federal agency that preserves and shares with the public records that trace the story of our nation, government, and the American people. From the Declaration of Independence to accounts of ordinary Americans, the holdings of the National Archives directly touch the lives of millions of people. The National Archives carries out its mission through a nationwide network of archives, records centers, and presidential Libraries, and online.

Featured image: The USS Jeannette’s logs are part of the Old Weather-Arctic project. The ship was entrapped in Arctic sea ice for many months. Only a few sailors and the logbook survived this doomed 1879 Arctic expedition. Credit: US Navy