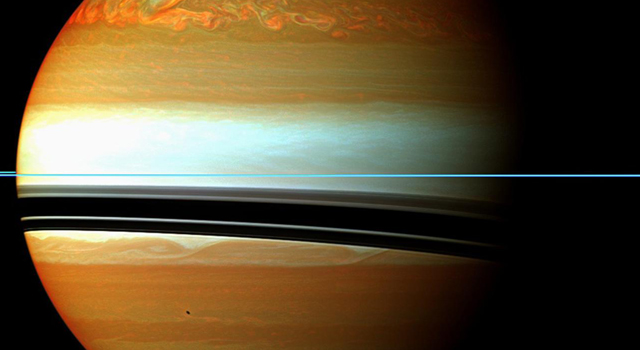 The heat-seeking capabilities of the international Cassini spacecraft and two ground-based telescopes have provided the first look at the aftermath of Saturn’s ‘Great Springtime Storm’. Concealed from the naked eye, a giant oval vortex is persisting long after the visible effects of the storm subsided.

The ground-based observations were made by the Very Large Telescope of the European Southern Observatory in Chile, and NASA’s Infrared Telescope Facility at the summit of Mauna Kea in Hawaii.

The vivid cloud structures that wreaked havoc across wide swathes of the mid-northern latitudes of Saturn’s atmosphere captured the imaginations of amateur and professional astronomers alike, from its first appearance in December 2010 through much of 2011. The storm grew so large that an equivalent storm on Earth would blanket most of North America from north to south and wrap around our planet many times. This type of giant disturbance on Saturn typically occurs every 30 Earth years, or once every Saturn year.

In new reports that focus on the temperatures, winds and composition of Saturn’s atmosphere, scientists find that the spectacular cloud displays were only part of the story, the storm was more forceful than scientists previously thought.

Much of the associated activity took place beyond the reach of visible-light cameras, and the after-effects are still continuing today.

Data from Cassini’s composite infrared spectrometer (CIRS) instrument revealed the storm’s powerful discharge sent the temperature in Saturn’s stratosphere soaring 150 degrees Fahrenheit (83 kelvins, 65 degrees Celsius) above normal. At the same time, researchers at NASA’s Goddard Spaceflight Center in Greenbelt, Md., detected a huge increase in the amount of ethylene gas, the origin of which is a mystery. Ethylene, an odorless, colorless gas, isn’t typically observed on Saturn. On Earth, it is created by natural and man-made sources.

Goddard scientists describe the unprecedented belch of energy in a paper to be published in the Nov. 20 issue of the Astrophysical Journal.

“This temperature spike is so extreme it’s almost unbelievable, especially in this part of Saturn’s atmosphere, which typically is very stable,” said Brigette Hesman, the study’s lead author and a University of Maryland scientist who works at Goddard. “To get a temperature change of the same scale on Earth, you’d be going from the depths of winter in Fairbanks, Alaska, to the height of summer in the Mojave Desert.”

Saturn’s 2010 Great White Spot storm has set a new record for the largest atmospheric temperature change ever detected during a storm on the ringed planet. By studying the monstrous disturbance using NASA’s Cassini spacecraft, researchers spotted a massive belch of energy that sent temperatures soaring to an unprecedented 150 degrees Fahrenheit above normal in Saturn’s stratosphere, accompanied by an enormous release of ethylene gas. Credit: NASA’s Goddard Space Flight Center

Not only was this the first storm of its kind to be studied by a spacecraft in orbit around the planet, but it was the first to be observed at thermal infrared wavelengths. Infrared data from CIRS allowed scientists to take the temperature of Saturn’s atmosphere and to track phenomena that are invisible to the naked eye.

Temperature measurements by CIRS, first published in May 2011, revealed two unusual beacons of warmer-than-normal air shining brightly in the stratosphere. These indicated a massive release of energy into the atmosphere. After the visible signs of the storm started to fade, CIRS data revealed the two beacons had merged. The temperature of this combined air mass shot up to more than minus 64 degrees Fahrenheit (above 220 kelvins).

According to Hesman, the huge spike of ethylene generated at the same time peaked with 100 times more ethylene than scientists thought possible for Saturn. Goddard scientists confirmed the release of the gas using the Celeste spectrometer mounted on the McMath-Pierce Solar Telescope on Kitt Peak in Arizona.

The team still is exploring the origin of the ethylene, but has ruled out a large reservoir deep in the atmosphere.

“We’ve really never been able to see ethylene on Saturn before, so this was a complete surprise,” said Goddard’s Michael Flasar, the CIRS team lead.

A complementary paper led by Cassini team associate Leigh Fletcher of Oxford University, England, describes how the two stratospheric beacons merged to become the largest and hottest stratospheric vortex ever detected in our solar system. Initially, it was larger than Jupiter’s Great Red Spot.

Their paper in the journal Icarus, which combines CIRS data with additional infrared images from other Earth-based telescopes, including NASA’s Infrared Telescope Facility at Mauna Kea, Hawaii, also reports a powerful collar of clockwise winds — encompassing a bizarre soup of gases — around the vortex.

“These studies will give us new insight into some of the photochemical processes at work in the stratospheres of Saturn, other giants in our solar system, and beyond,” said Scott Edgington, Cassini deputy project scientist at NASA’s Jet Propulsion Laboratory (JPL) in Pasadena, Calif.

“It’s the first time we’ve seen anything like it on any planet in the Solar System, it’s extremely unusual, as we can only see the vortex at infrared wavelengths – we can’t tell that it is there simply by looking at the cloud cover,” Fletcher said.

The question now remains as to whether Saturn’s storm-generating energy has been sapped or if there will be a repeat performance.

The outburst already caught observers by surprise by arriving during the planet’s northern hemisphere spring, years ahead of the predictably stormy summer season.

“The beauty is that Cassini will be operating until the Saturn system reaches its summer solstice in 2017, so if there is another global event like this, we’ll be there to see it,” says ESA’s Cassini project scientist Nicolas Altobelli.

“The origin and evolution of Saturn’s 2011–2012 stratospheric vortex” by L. Fletcher et al., is accepted for publication in Icarus.

A complementary paper by B. Hesman et al. is accepted for publication in the Astrophysical Journal.

The Cassini–Huygens mission is a cooperative project of NASA, the European Space Agency and the Italian Space Agency. The Jet Propulsion Laboratory, a division of the California Institute of Technology in Pasadena, manages the mission for NASA’s Science Mission Directorate, Washington, DC.

The head of the storm is beyond the horizon in this view. Saturn’s atmosphere and its rings are shown here in a false color composite made from 12 images taken in near- infrared light through filters that are sensitive to varying degrees of methane absorption. Red and orange colors in this view indicate clouds that are deep in the atmosphere. Yellow and green colors, most noticeable near the top of the view, indicate intermediate clouds. White and blue indicate high clouds and haze. The rings appear as a thin horizontal line of bright blue because they are outside of the atmosphere and not affected by methane absorption.

The oval in the upper left of this image that appears slightly blue is the same hole in the deep clouds of the planet’s atmosphere that can be seen near the tail in a larger false-color mosaic, PIA14903. The blue color comes from the high haze overlying the hole.

This view looks toward the northern, sunlit side of the rings from just above the ring plane. The shadow of the moon Enceladus is visible on the planet in the lower left of the image.

The images were taken on Jan. 12, 2011, over about one hour at a distance of approximately 684,000 miles (1.1 million kilometers) from Saturn and at a sun-Saturn-spacecraft, or phase, angle of 52 degrees. The images were re-projected to the same viewing geometry, so that scale in this final mosaic is 76 miles (122 kilometers) per pixel.

The Cassini-Huygens mission is a cooperative project of NASA, the European Space Agency and the Italian Space Agency. NASA’s Jet Propulsion Laboratory, a division of the California Institute of Technology in Pasadena manages the mission for NASA’s Science Mission Directorate, Washington. The Cassini orbiter and its two onboard cameras were designed, developed and assembled at JPL. The imaging operations center is based at the Space Science Institute in Boulder, Colo.