Dave Petley is the Wilson Professor of Hazard and Risk in the Department of Geography at Durham University in the UK. His blog provides a commentary on landslide events occurring worldwide, including the landslides themselves, latest research, and conferences and meetings and we simply love it! It is probably the best blog covering geological processes, with focus on landslides, mudslides, rockslides and sinkholes.

Durham University has now paid the page charges for his recent paper in Geology, which means that for the next two years it can be downloaded for free here.

This work is based on his fatality database, detailing the global cost of landslides worldwide, data collected and researched from September 1, 2002. You can read it here. The journal Geology has also placed it online.

The paper covers the period 2004-2010 and focuses on landslides caused by non-seismic processes (i.e. earthquakes are excluded).  In that period, Dave Petley have recorded 32,322 deaths in 2,620 landslides. The dataset includes a map of the fatalities, which indicates where the global hotspots lie.

Some resources regarding the paper can be found on FTP site (ftp://topdog.dur.ac.uk/dnp/geology/ – WordPress seems to mangle the ftp address for some reason).

The global hotspots that emerge for landslides are as follows: 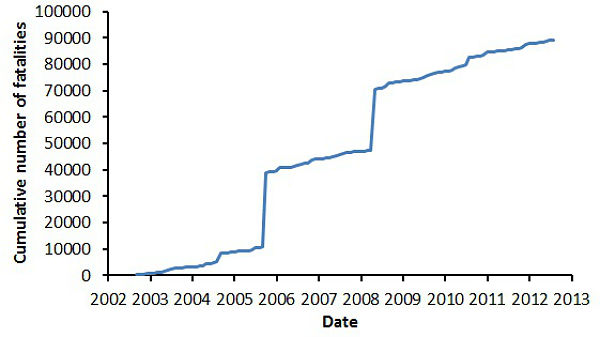