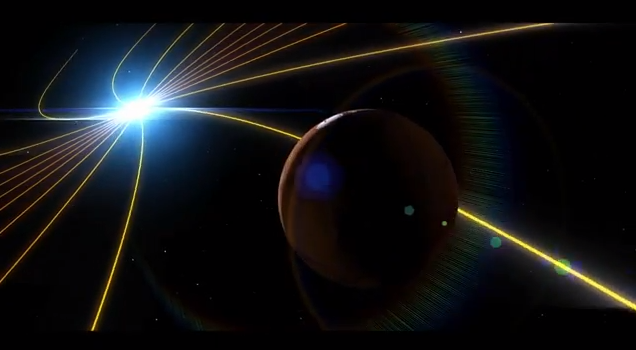 Many scientists think that long ago, Mars once had a denser atmosphere, cloudy skies that supported liquid water flowing over the surface. For some reason, most of the Martian atmosphere was lost to space long ago and the thin wispy atmosphere no longer allows water to be stable at the surface. Scientists don’t have answers on how this happened.

Planet can lose its atmosphere through a process called sputtering by knocking atoms away from the atmosphere due to impacts from energetic particles. Physical sputtering is driven by momentum exchange between the ions and atoms in the materials, due to collisions. Sputtering is one of the forms of space weathering, a process that changes the physical and chemical properties of airless bodies, such as asteroids and our moon. It is also one of the possible ways that Mars has lost most of its atmosphere and that Mercury continually replenishes its tenuous surface-bounded exosphere. Martian atmosphere could have been eroded by interactions with the solar wind because of its lack of magnetic field.

The video above, provided by NASAExplorer, shows NASA’s MAVEN spacecraft giving us a clearer idea of how Mars lost its atmosphere. The Mars Atmosphere and Volatile Evolution spacecraft or MAVEN is equipped with eight different sensors that will take measurements of the upper Martian atmosphere. MAVEN will be the first spacecraft ever to make direct measurements of the Martian atmosphere. MAVEN is scheduled to launch in 2013, with a launch window from Nov. 18 to Dec 7, 2013. Mars Orbit Insertion will be in mid-September 2014.

MAVEN will orbit Mars for at least one Earth-year, about a half of a Martian year to provide information on how and how fast atmospheric gases are being lost to space today, and infer from those detailed studies what happened in the past. Future data obtained by MAVEN can reveal clues about the impact that change had on the Martian climate, geologic, and geochemical conditions over time, all of which are important in understanding whether Mars had an environment able to support life.