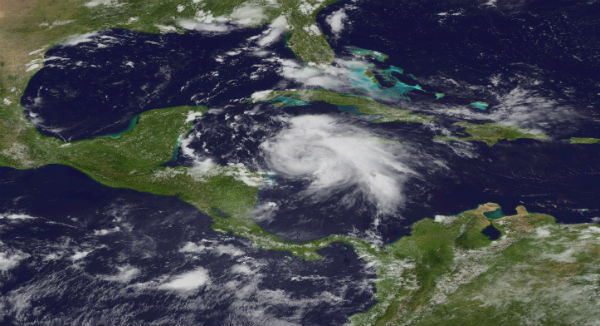 Tropical Storm Ernesto started to gain strength and it is expected to become hurricane tonight. Additional strengthening is possible prior to landfall. Heavy showers and thunderstorms will soak the Cayman Islands through tonight before intensifying and approaching the coast of Honduras before taking aim on Belize. Ernesto is expected to make landfall as a Category 1 hurricane in Belize early Wednesday morning. Dangerous flash flooding and rainfall amounts of over one foot, mudslides and power outages present a serious threat to Belize. 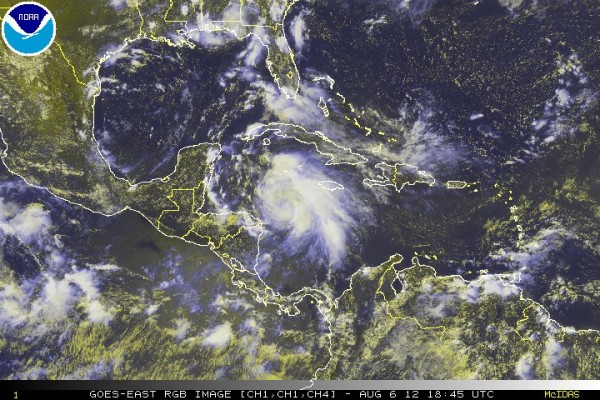 At latest public advisory at 18:00 UTC, the US National Hurricane Center (NHC) reported that Ernesto was located near latitude 16.2N and longitude 81.1W. Ernesto is moving west-northwestward at speed of 19 km/h (12 mph) and this general motion is expected to continue for the next 48 hours. The center is expected to pass north of the coast of Honduras tonight and Tuesday and approach the east coast of the Yucatan peninsula early Wednesday.

An AirForce hurricane hunter aircraft investigating the storm in the morning found that Ernesto has strengthened and that the center is located somewhat to the northeast of the previously position. The vertical shear appears to have diminished, and now that the center is well embedded within the main mass of deep convection, there is increased likehood of strengthening. The official forecast now shows Ernesto becoming a hurricane. The numerical track guidance indicates that the ridge will not weaken enough to allow Ernesto to turn toward the northwestern Gulf of Mexico.

Ernesto is expected to produce rainfall totals of 3 to 5 inches along the northern coast of Honduras and the northeast coast of Nicaragua with isolated maximum amounts of 8 inches over mountainous terrain. Rainfall amounts of 4 to 8 inches with isolated maximum amounts of 12 inches are expected over the southern portion of Yucatan peninsula nd Belize. These rains are likely to cause dangerous flash floods and mudslides over the higher terrain.

A dangerous storm surge will raise water levels by as much as 2 to 4 feet above normal tide levels along the immediate coast near and to the north of where the center makes landfall accompanied by large and dangerous waves. 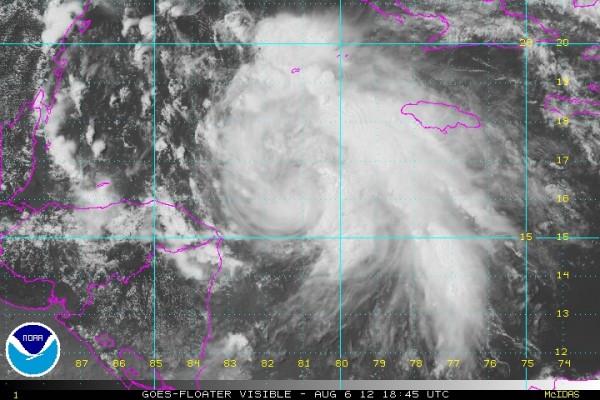 The Government of Belize has issued a hurricane warning for the entire coast of Belize.

Hurricane warning means that hurricane conditions are expected within the warning area. A warning is typically issued 36 hours before the anticipated first occurrence of tropical-storm-force winds (conditions that make outside preparations difficult or dangerous). Preparations to protect life and property should be rushed to completion.

A tropical storm warning is in effect the coast of Honduras from the Honduras-Nicaragua border westward to Punta Sal including the Bay Islands.

The Government of the Cayman Islands has discontinued the tropical storm watch for Gran Cayman.

At this time NEMO urges the public to put their Hurricane plan into action! People living along the coast and in the outer Cayes: Turneffe, Glover’s Reef, Light House,  Half-moon Caye, Sand Bore Caye, Northern 2 Caye, North East, South West and Middle Caye need to heed the warnings issued by NEMO and make necessary preparations to move in land. Coast Guard have been warning and encouraging people to move inland from the Cayes. Those persons who are capable of leaving the Cayes on their own are advised to voluntarily evacuate!
People living in areas that normally flood need to move to a dry and safe building and remember to take along their food and water to the Shelter.

Tomorrow additional public transportation will be made available by the bus operators to support the public moving inland. Government Transport will be pooled for deployment in Corozal, Orange Walk, Belize City and Cayo District.