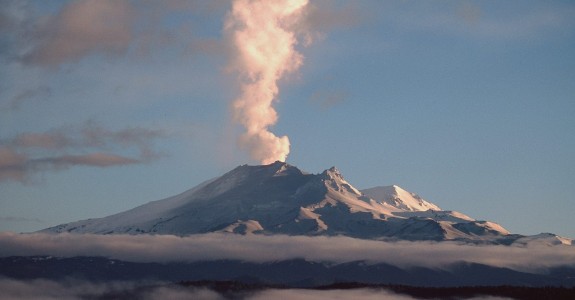 The volcanic alert level for Mt. Tongariro has risen from 1 to 2 after the central North Island volcano erupted for the first time in more than a century late last night. GNS science is reporting that at approximately 11:50 UTC on Monday, August 6, 2012 ash fall began to be reported in the volcano’s vicinity – it has since been reported as far east as SH5 near Te Haroto and in Napier.

GNS duty volcanologist Michael Rosenberg told Radio New Zealand that some people are reported to have left their houses on the southern shores of Lake Rotoaira, though no formal notices of evacuation have been issued so far by Civil Defense. He said residents in the area have told GNS of hearing several loud explosions, lightning and plumes of smoke and police have been told by an onlooker that “a new hole in the side of the mountain” had formed.

They have also reported bright red rocks flying out of the mountain. The eruption reportedly happened at the Te Mari Craters, which are close to the Ketetahi Hot Springs on the northern side of the mountain. Civil defence spokesman Vince Cholewa told NewstalkZb ash could reach those living in Waikato, Hawke’s Bay, Gisborne, Manawatu-Wanganui, Bay of Plenty and Taranaki.

“The advice to people is to stay indoors, because volcanic ash can obviously be a health hazard, if they’re indoors please close windows and doors to try and limit the entry of ash.” Mr Cholewa says at this stage not all areas alerted are affected by ash, but that situation could change. “We’re working actively with GNS Science who operate the monitoring equipment on the mountains, and with police so all the information from the ground is being gathered, and decisions will be based on that information. “Evacuations have not been ordered, please listen to the radio for advice from local authorities and police, any evacuations would be issued at that level, and based on the evidence from GNS Science.”

Due to possible danger to the public the police have closed SH1 between Rangipo and Waiouru (Desert Road) and SH46 west of Rangipo. SH47 and 4 remain open at this stage as does SH5. Motorists are being advised to avoid travel in the area and these closures will be re-assessed once daylight reveals the extent of the ash cloud. A truck driver has told Radio New Zealand that the ash cloud has caused thick dust and reduced visibility on the Desert Road. Bryn Rodda said he saw a large cloud rising from the mountain with orange flashes. Civil Aviation Authority manager of meteorology Peter Lechner told NewstalkZb the plume is leading off to the east and south east. “Flight operations to the west of the plume should remain unaffected, however operations to the eastern half of the North Island will have some difficulty at this stage.” Mr Lechner says a frontal system is on its way which should disperse the cloud, but that depends on whether there are further eruptions.

Police are sending search and rescue teams up Mt. Tongariro at first light to check no one is stranded in huts. However, they say there have been no reports of injuries or damage. The Ministry of Civil Defence & Emergency Management (MCDEM) is currently assessing information with the assistance of GNS scientific advisors. It has not yet activated the National Crisis Management Centre which is called upon in times of emergency like the Christchurch earthquake. New Zealand’s other high profile active volcano, White Island, also had its alert level raised from 1 to 2 on Monday after a small eruption was recorded in its crater lake.

The Red and Te Mari craters were active in the 1800’s.

Altitude, steep slopes, ‘fresh’ volcanic material and erosion prevent vegetation growing on most parts of the Tongariro complex. Some craters have filled with water to create the spectacular Blue Lake and the Emerald Lakes. Check out our video of the landscape features of Tongariro here.