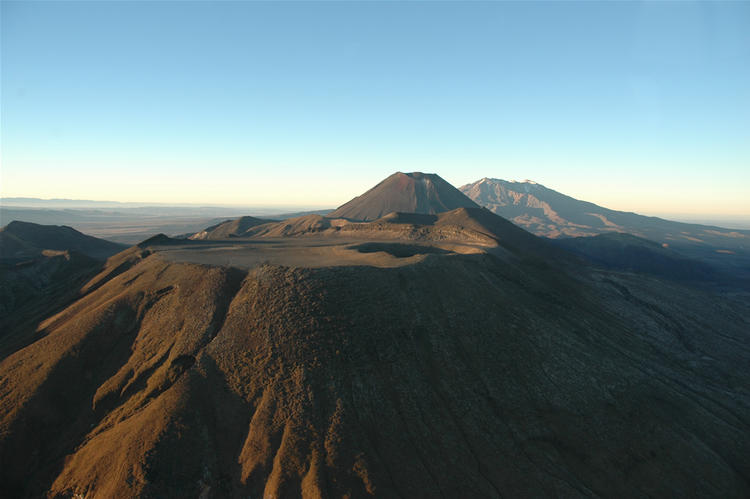 On July 20, 2012, GeoNet raised the Volcano Alert Level at Mt. Tongariro, New Zealand after a series of quakes beneath the volcanic complex. The Aviation Color Code is now at Yellow and Volcanic Alert Code at 1.

Small volcanic earthquakes have been recorded beneath Mount Tongariro. The sequence started on July 13, but soon declined, restarting on July 18 and increased in numbers on July 19 and 20. The earthquakes cluster is in a zone between Emerald Crater and the Te Māri craters at depths between 2 – 7 km.

This complex of multiple volcanic cones was constructed over a period of 275 000 years.

Five eruptions had been recorded at Tongariro between 1855 to 1897, with some unconfirmed activity in 1926-27.

The Te Mari craters, about  2 km east of Ketetahi hot springs on the north side of Mt Tongariro, were the last craters confirmed as active on Tongariro.

In 1869 a large eruption accompanied by an earthquake at Tongariro formed the upper Te Mari Crater during an explosive eruption. Maori descriptions talked of "bright red flame through the smoke that would burst and fall like snow", GeoNet said.

In November 1892 Te Mari again belched forth an immense quantity of steam, mud, and boulders. The ejected material rose 600 to 900 meters before rushing down the mountainside. The last eruption began in November 1896 and continued until the end of that year.

GNS Science volcanologist Brad Scott said the increased activity "just means that something has upset Tongariro, and some subterranean process is occurring".

"It may or may not develop into anything further," he said. "It's a little bit unusual," but Tongariro was "an active volcano in an active geothermal system".

In the past 4 000 years, Tongariro had been completely dominated by activity at Ngauruhoe, which had built a 750-meter high cone in that time.

GeoNet historic seismic data has shown that these small volcanic earthquakes are common at Tongariro, but they usually only occur at an average rate of 2 per year. We have recorded more than 20 since July 13. Seismic activity indicating unrest was last detected at Tongariro during 2001. Our routine volcano monitoring also includes the chemistry of the lakes, springs and fumaroles on Tongariro. These were last sampled in May 2012. The samples collected in May show no anomalies.

Tongariro is a large andesitic volcanic massif, located immediately NE of Ruapehu volcano, that is composed of more than a dozen composite cones constructed over a period of 275,000 years. Vents along a NE-trending zone extending from Saddle Cone (below Ruapehu volcano) to Te Mari crater (including vents at the present-day location of Ngauruhoe) were active during a several hundred year long period around 10,000 years ago, producing the largest known eruptions at the Tongariro complex during the Holocene. North Crater stratovolcano, one of the largest features of the massif, is truncated by a broad, shallow crater filled by a solidified lava lake that is cut on the NW side by a small explosion crater. The youngest cone of the complex, Ngauruhoe, has grown to become the highest peak of the massif since its birth about 2500 years ago. The symmetrical, steep-sided Ngauruhoe, along with its neighbor Ruapehu to the south, have been New Zealand's most active volcanoes during historical time.

GNS Science volcanologists are monitoring the unrest and further information will be released as necessary.