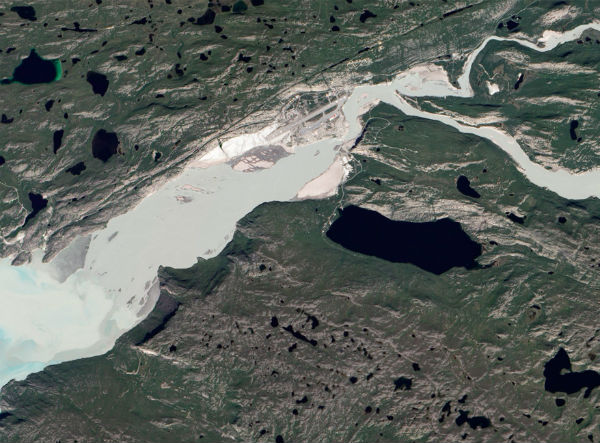 Recent satellite images show flooding in Kangerlussuaq, a key air transportation hub on Greenland. Located in southwestern Greenland roughly 125 kilometers (75 miles) from the coast, Kangerlussuaq, or Kanger, hosts one of the island’s busiest commercial airports. Kangerlussuaq is a frequent departure point for scientific research flights, including the NASA IceBridge program.

Near the airport, the Watson River flows through town. The river is fed by the nearby Russell glacier, which sits just outside of town. Unlike other glaciers, which are exposed to the warming ocean waters, it sits entirely on land. 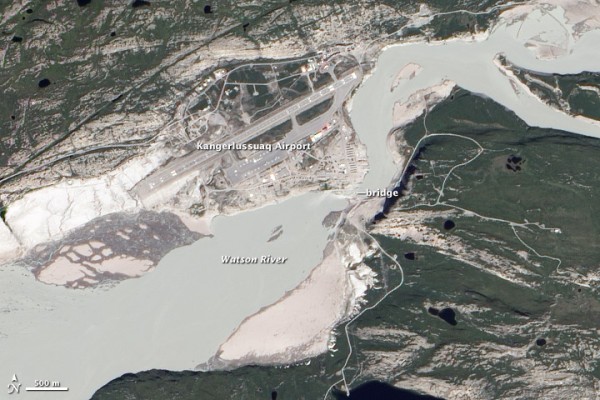 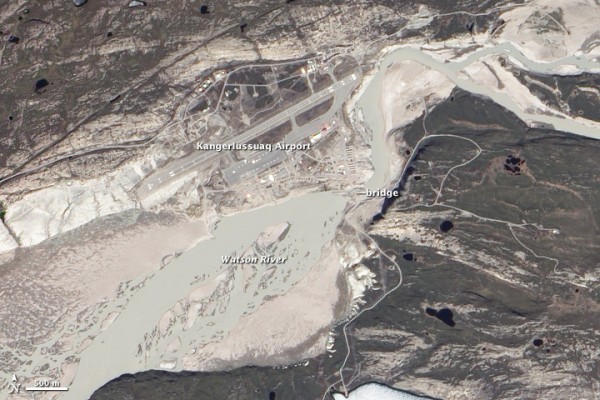 Having recently returned from a trip to Greenland, Jason Box of the Byrd Polar Research Center at Ohio State University noted an increase in the intensity of spring and summer melt over the past dozen years. Richard Forster, a University of Utah professor, said that water rises every year, but he have never before observed it at this level of discharge. The melting event was also about two weeks prior to the normal seasonal peak. He noticed that it was most likely due to melt on the ice sheet – rather than an ice-dammed lake bursting or glacial lake drainage – as the high discharge was maintained for so long.

Ted Scambos, lead scientist at the National Snow and Ice Data Center, points that even though melt water mostly refroze in place in the upper part of the Greenland Ice Sheet, lower down the melt runs off the ice sheet into rivers and creeks and into the ocean.

A bridge spans the river at a narrow point southeast of the airport, and allegedly dates from the 1950s. By July 21, flood waters had washed out parts of the bridge, according to video footage published by The Guardian.