New details have emerged about the Greenland landslide that occurred in Karrat Fjord and the deadly tsunami it produced late Saturday (local time), June 17, 2017.

It was initially thought that the tsunami was created by a magnitude 4.0 earthquake with the epicenter 28 km (17.4 miles) north of the village of Nuugaatsiaq on the western coast of Greenland. However, reconnaissance flights performed by the Danish Joint Arctic Command on June 18 discovered a large landslide scar (approximately 300 x 1 100 m / 985 x 3 600 feet), thus confirming that the cause of the tsunami was a landslide.

On June 19, Arctic Command sent additional aircraft to study the scar left by the landslide and found that another potentially unstable slope is located next to the failed mass. The discovery prompted the full evacuation of the village of Nuugaatsiaq, where 23 people initially decided not to leave, and both Illorsuit and Viaqornat.

According to Dr. Dave Petley of The Landslide Blog, Strasburg University's Clément Hibert, André Stumpf and Jean-Philippe Malet have downloaded the data from the local seismic station and concluded that the M4.0 signal was indeed generated by the landslide. 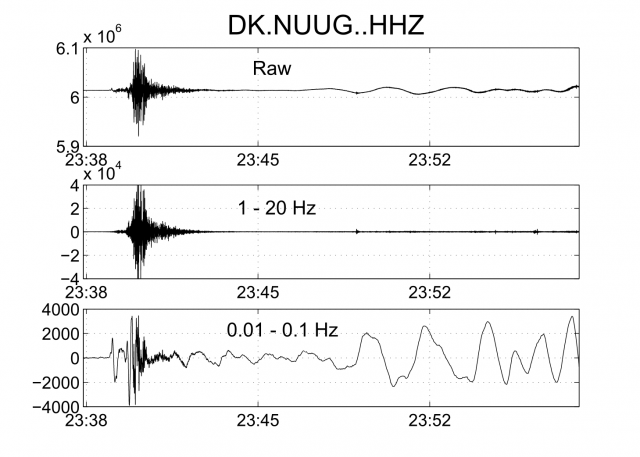 "The high-frequency seismic signal (1-20Hz) exhibits the ‘classical’ features of high-frequency signals generated by landslides (emergent onset, no phases, lots of energy in the high-frequency >1Hz). However the onset of the long-period signal (<0.1 Hz) is peculiar. The first phase, coherent and visible at other stations, is more characteristic of shear faulting. This might suggest a very fast destabilisation of the mass. This is my assumption and I think this should be more thoroughly investigated with inversion and modeling methods for example," Hibert said.