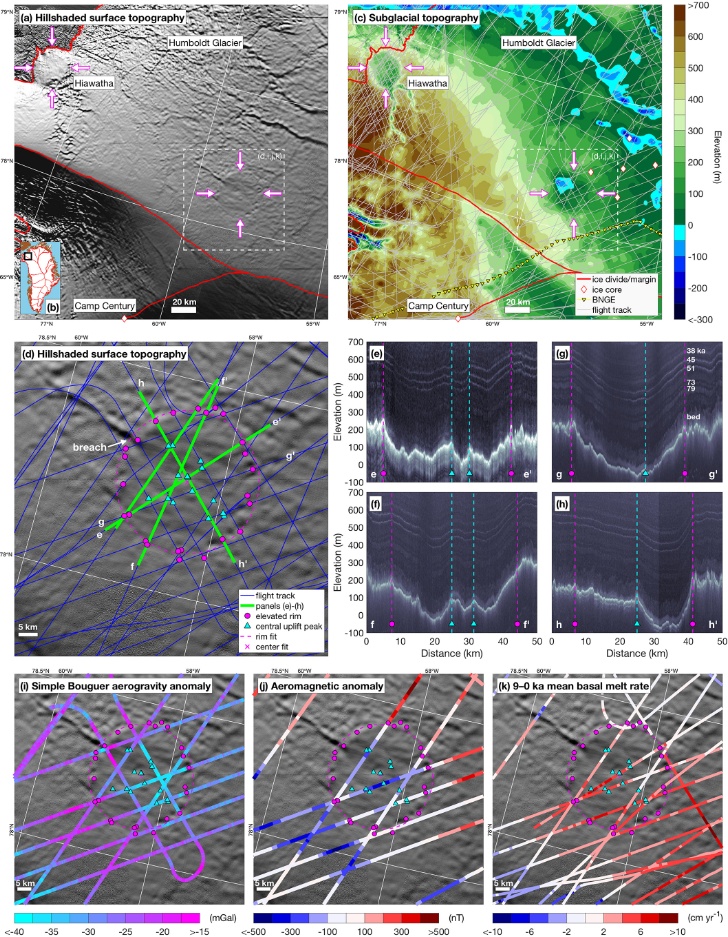 The structure's rim induces a conspicuously circular surface expression, it possesses a central uplift, and it causes a negative gravity anomaly – properties consistent with an impact origin.

"We conclude that the identified structure is very likely an impact crater," scientists said in an abstract of their study published February 11, 2019 in Geophysical Research Letters.

"The only other circular structure that might approach this size would be a collapsed volcanic caldera," lead author Joe MacGregor said. "But the areas of known volcanic activity in Greenland are several hundred miles away. Also, a volcano should have a clear positive magnetic anomaly, and we don’t see that at all."

The new and Hiawatha craters are similarly sized, but the candidate second crater appears more eroded and ice above it is much less disturbed than above the Hiawatha impact crater.

From the same radar data and ice cores that had been collected nearby, MacGregor and his colleagues determined that the ice in the area was at least 79 000 years old. The layers of ice were smooth, suggesting the ice hadn’t been strongly disturbed during that time. This meant that either the impact happened more than 79 000 years ago or – if it took place more recently – any impact-disturbed ice had long ago flowed out of the area and been replaced by ice from farther inland.

The researchers then calculated that a crater of that size would have initially been more than 800 m (0.5 miles) deep between its rim and floor, which is an order of magnitude greater than its present depth. Taking into account a range of plausible erosion rates, they calculated that it would have taken anywhere between roughly a hundred thousand years and a hundred million years for the ice to erode the crater to its current shape –  the faster the erosion rate, the younger the crater would be within the plausible range, and vice versa.

"The ice layers above this second crater are unambiguously older than those above Hiawatha, and the second crater is about twice as eroded," MacGregor said. "If the two did form at the same time, then likely thicker ice above the second crater would have equilibrated with the crater much faster than for Hiawatha."

MacGregor is a glaciologist with NASA’s Goddard Space Flight Center in Greenbelt, Maryland, who participated in both findings.