A newly published research suggests the crater left behind by the biggest asteroid to ever hit Earth has been found. Traces of the gigantic impact of the meteorite, which crashed on the planet approximately 790 000 years ago, have been observed across around 20% of the Eastern Hemisphere– 10% of the Earth's surface. According to the study, the meteorite struck southern Laos, leaving a 13 by 17 km (8 by 10 miles) crater which is now covered by lava flow.

Study co-author Kerry Sieh, a geologist at Nanyang Technological University in Singapore, said the discovery may help reconstruct some of the upheavals that the impact caused. It could also explain what to expect if a large asteroid were to strike Earth again.

Sieh explained that most massive meteorites hit the planet a long time ago that their craters have almost entirely eroded. However, this particular impact was unusual in a way that it was massive and recent enough, and that the area where it hit should be distinguishable. With rocks from the impact spread across the world, zeroing in on the site proved difficult.

The crater was undiscovered for decades until Sieh took a new approach and look at satellite imagery from parts of the world where the meteorite might have possibly struck. In the Bolaven Plateau, he found that a shallow rock formed from hardened lava– thick enough to cover a crater of its size. 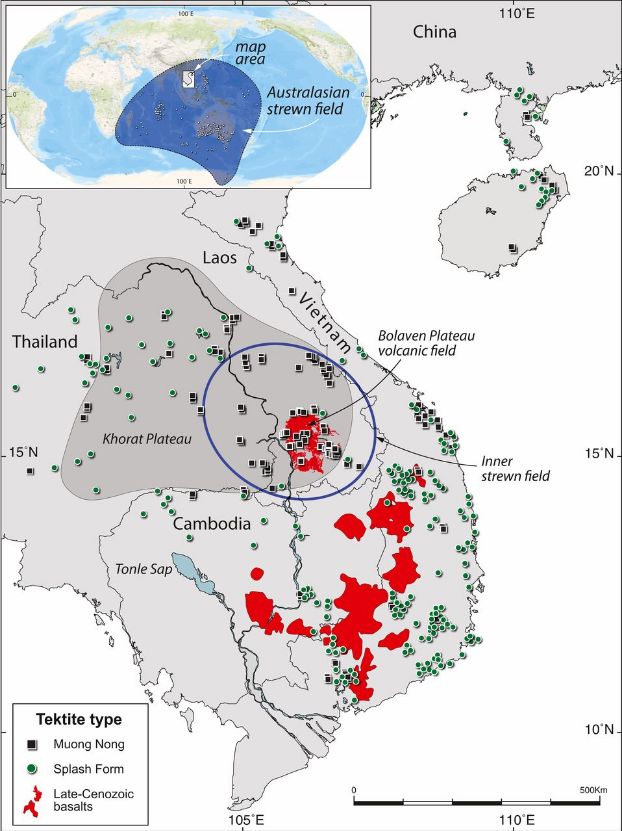 Excavations found the lava dated to around the same period as the impact, while the sediments were older. Further gravity measurements also provided a hint at the crater below. Sieh said those are enough altogether for him to say that he has finally detected the crater.

Along with his team, researchers had a clearer sense of what must have happened following the impact. Around 2 km (1.25 miles) wide, the rock would have opened a hole bigger than San Francisco in seconds.

The asteroid's speed and force would have been strong enough to send pillow-sized boulders rushing through the air at around 457 mps (1 500 ft per second). These rocks are a culprit of a meteorite impact. "It would not have been a healthy thing to be on the receiving end of that."

In the meantime, Sieh said he wants to focus on some of the ashy material blanketing the meteor debris.

The impact would have reduced to ashes all life– plants and animals– within 480 km (300 miles) of the impact location, and Sieh is eager to figure out how that kind of dust would affect all living things in the present time.

As for drilling down through the rock to affirm that in fact, it is the site, Sieh said, "I'm 98% convinced we found it, but I’d be supportive of anyone who wanted to."

The crater and proximal effects of the largest known young meteorite impact on Earth have eluded discovery for nearly a century. We present 4 lines of evidence that the 0.79-Ma impact crater of the Australasian tektites lies buried beneath lavas of a long-lived, 910-km3 volcanic field in Southern Laos: 1) Tektite geochemistry implies the presence of young, weathered basalts at the site at the time of the impact. 2) Geologic mapping and 40Ar-39Ar dates confirm that both pre- and postimpact basaltic lavas exist at the proposed impact site and that postimpact basalts wholly cover it. 3) A gravity anomaly there may also reflect the presence of a buried ∼17 × 13-km crater. 4) The nature of an outcrop of thick, crudely layered, bouldery sandstone and mudstone breccia 10–20 km from the center of the impact and fractured quartz grains within its boulder clasts support its being part of the proximal ejecta blanket. The Australasian strewn field, a horizon of glassy clasts (“tektites”) quenched from molten ejecta of a bolide impact about 0.79 Ma (1, 2), extends across about 1/10 of the Earth’s surface (3)––from Indochina to East Antarctica and from the Indian to western Pacific Oceans (Fig. 1, Inset). The northwestward increase in both the abundance and the size of tektite specimens points to the impact site being in eastern central Indochina (3⇓⇓⇓–7). This is within the region of Muong Nong-type tektites, the least streamlined, most volatile-rich, most siliceous, and largest of the ejected melt fragments. Their high silica content, relict grains, and other chemical characteristics indicate primarily quartz-rich coarse siltstone to fine sandstone target rocks (6, 8⇓–10), perhaps of Jurassic age (11).